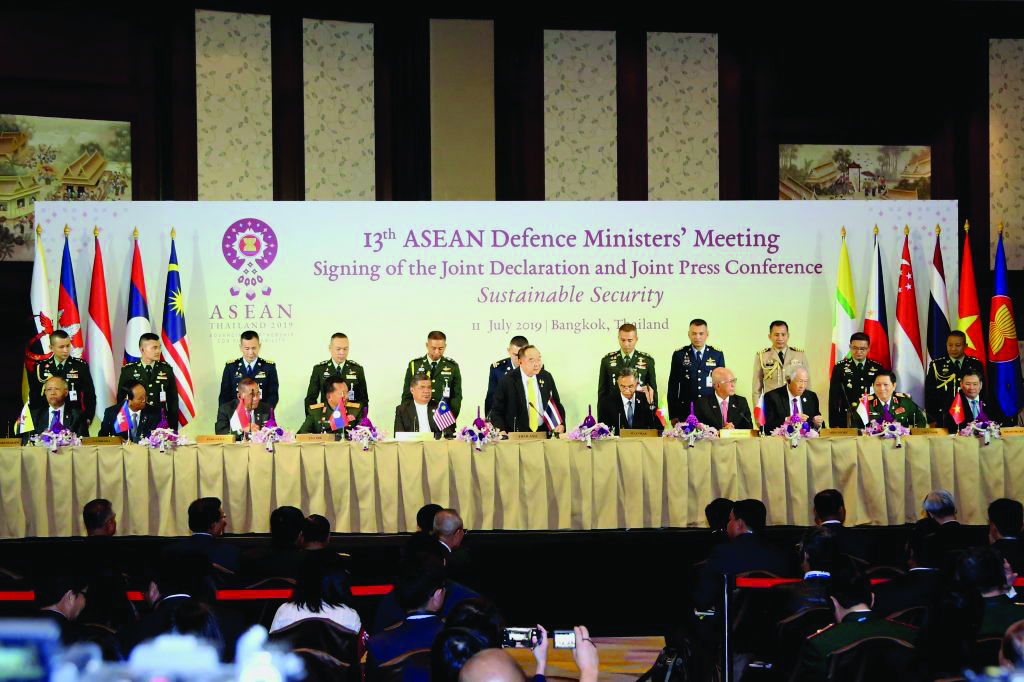 Sticking steadfast to ASEAN’s founding principles and steering a middle path between China and the United States, defence ministers of the Association of Southeast Asian Nations (ASEAN) announced a Joint Declaration on Sustainable Security and adopted six initiatives to strengthen defence and security cooperation in the region to counter a range of threats.

The Ministers: “Reaffirm(ed) our intention in strengthening, consolidating and optimising defence cooperation amongst ASEAN member states as well as with the Plus countries to develop a bold and forward-looking approach capable of responding effectively to the current and future non-traditional security challenges that leaves no one behind, while upholding ASEAN Centrality. “

They also agreed expand the regional grouping’s secured hotline for direct communication to eight other countries. The 13th ADMM also recognised the importance of its extra-regional partners in achieving regional peace and stability in which the defence ministers agreed to expand direct and secure telecommunication connections among them via the ASEAN Direct Communications Infrastructure (ADI), to now include the Plus countries, as well as to continue practical defence cooperation for capability building and interoperability through the ADMM-Plus Expert Working Groups (EWGs). The Plus countries are Australia, China, India, Japan, New Zealand, South Korea, Russia and the United States. Along with the 10 ASEAN countries, they form the expanded ADMM-Plus platform.

The six documents adopted are on: Guidelines for the Assessment of the ADMM Initiatives; Role of ASEAN Defence Establishments in Supporting Border Management; Expansion of the ASEAN Direct Communications Infrastructure in the ADMM Process to the Plus Countries; Terms of Reference of ASEAN Our Eyes, Establishment of ASEAN Military Medicine Conference and ADMM Guidelines for Maritime Interaction.

The ADMM is the highest-level meeting amongst the defence establishments of ASEAN member states, which has been held annually since 2006, under the umbrella of the ASEAN Political-Security Community (APSC). The Bangkok meeting also served as a platform for ASEAN defence ministers to consider and adopt key documents on the ADMM initiatives and prepare for the upcoming ASEAN Defence Ministers’ Meeting-Plus (ADMM-Plus) in November 2019.