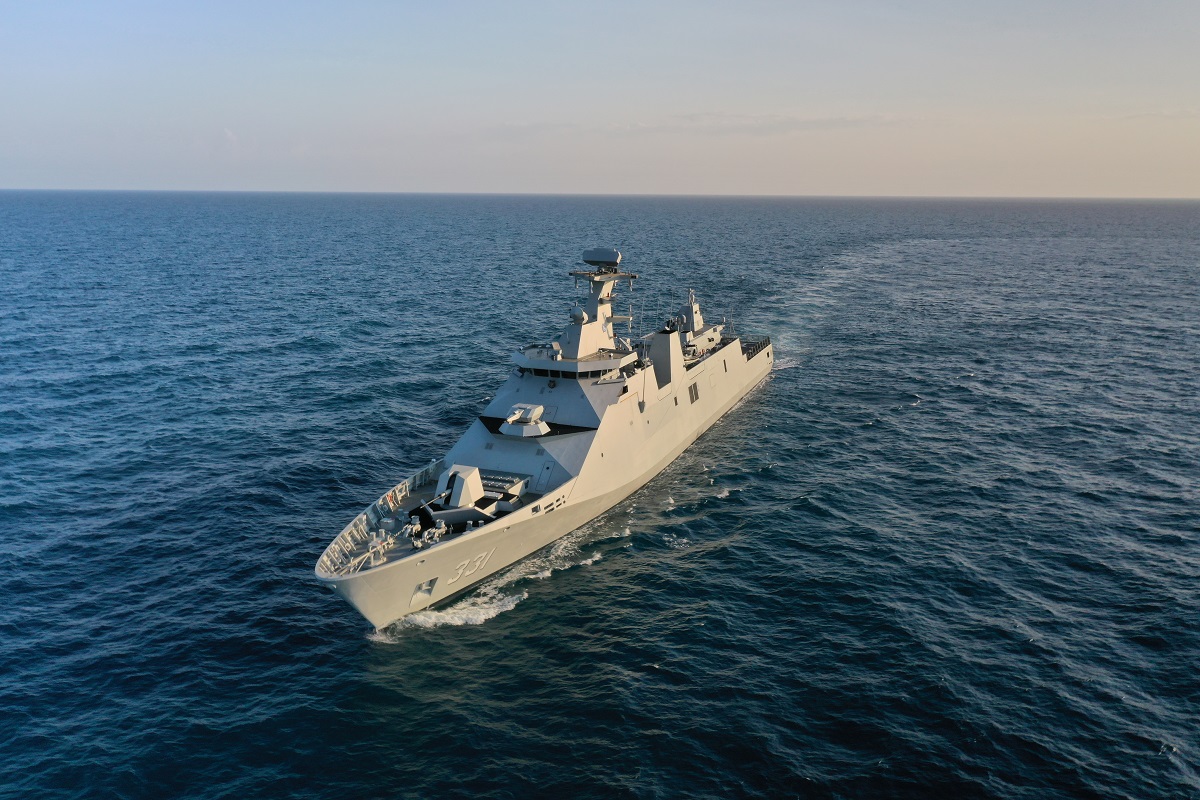 Damen Shipyards Group and its partner PT PAL have completed the installation of combat systems to the first of the Indonesian Ministry of Defence’s series of SIGMA 10514 Perusak Kawal Rudal (PKR) guided missile frigates, the KRI Raden Eddy Martadinata, the company announced on Dec 6. The combat systems installation project’s successful conclusion was marked by a small handover ceremony on the Dec 4 at Surabaya.

The PKR frigates are constructed via a collaborative modular process operating simultaneously at Damen Schelde Naval Shipbuilding (DSNS) in the Netherlands and PT PAL shipyard in Indonesia. With this method, Damen is able to construct high quality vessels anywhere in the world. This also enables Damen to fulfil its contractual commitment to the Indonesian Ministry of Defence to deliver an extensive knowledge and technology transfer programme.

This combat installation and testing phase of PKR construction forms part of this transfer programme, with Damen providing training for the vessel’s crew in the operation and maintenance of all systems installed. This has proven to be a success, says Colonel Dwi Cahyo Kuncoro, DANSATGAS (head of the Indonesian Ministry of Defence’s SATGAS team supervising the project): “There has been a very smooth cooperation with Damen and the PT Pal shipyard, both with the construction of the ship and during the installation and testing of combat systems.”

The combat system sea acceptance trials were carried out over a three-week period. During this trail the electronic warfare suite was tested by Thales. This consists of two main systems, an electronic support measure (passive radar receiver), which enables the vessel to record and interpret the various radar signals it receives from the operational environment and an electronic counter measure system – mostly referred to as jammer. These two systems work together with the combat management system – the centre point in the entire web, in order to perform electronic warfare operations.

This was followed by structural firing tests and the alignment of the ship’s sensors and the ship’s guns, done with the support of Rheinmetall to make sure the sensors and weapons are “looking in the same direction”. Exocet surface to surface missile launching system was tested by MBDA France.

The testing of the anti-air warfare (AAW) and anti-surface warfare (ASuW) functional changes, were the last tests in the schedule. This comprises detecting and tracking surface and air targets, measuring the pointing accuracy of the guns at various heights and distances and to evaluate engagements of air and surface targets with various weapon systems. It also included the trials of the degaussing system, used to control the ship’s magnetic signature.

Jeffrey Vader, Project Director DSNS said, “The results of the combat systems installation and testing have been hugely successful. As with the construction of the vessel, we have completed this phase both on time and on budget. We are now looking forward to getting underway with the installation and testing of the combat systems on the second vessel.”

The second vessel is scheduled to undergo the same installations and testing up to February 2020, and is expected to be completed at the end of April.