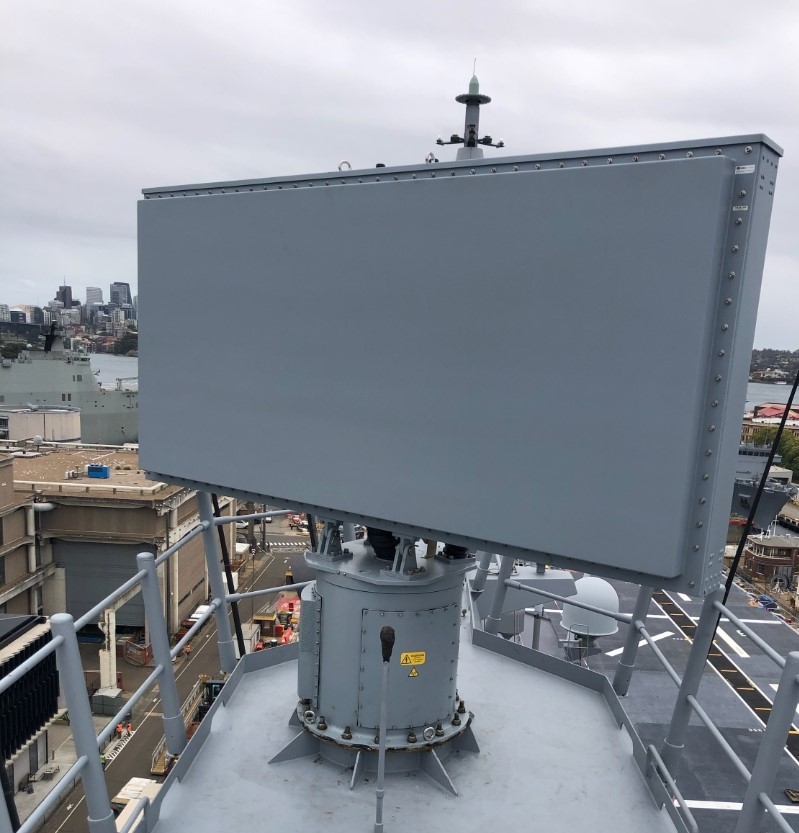 CANBERRA: The first of Royal Australian Navy’s IFF system’s antenna and pedestals from Canberra-class vessels has been overhauled at HENSOLDT Australia’s new overhaul facilities and workshops in Canberra. This is the first of four antennas and pedestals that will undergo repair and deep level maintenance in Australia.

The HENSOLDT facility already supports the IFF interrogator for the Royal Australian Navy (RAN) and Royal Australian Air Force (RAAF) but was expanded to enable local test, overhaul and repair of this additional heavy equipment. This antenna equipment stands more than 2.4m high and 2.6m wide and weighs in at around 350kg and has required the implementation and installation of specialist lifting equipment, power and mechanical interfaces.

Now through this Australian team of technicians, together with the specialist equipment and an onsite store of parts, Hensoldt Australia can repair, overhaul and commission this crucial Navy capability and bring it back into service more quickly and more cost effectively.

“When Hensoldt Australia was contracted to update the interrogator on the HMAS Canberra, routine testing identified problems with the pedestals and antennas,” says Managing Director Hendsolt Australia & New Zealand, Jon Wachman. “Investigations uncovered that the equipment was failing and impacting operational performance,” he said.

“After assessing with the Navy the overseas repair options and timeframe, and as experts in sensor solutions, we agreed to expand our Australian capability to support the complete antenna system on board the LHD, backed by a local supply chain and expertise.”

The first step in repair was to conduct a detailed assessment of the antenna and pedestal, then dismantle the systems and address the corrosion together with a heavy duty repaint in the new navy grey to further protect it from future damage in the marine environment. It was reassembled and mounted on a test stand in the warehouse, where Hensoldt technicians tested it with the replicated control system that is used onboard the ships. This involved both electrical, mechanical and rotational testing of the antenna.

The antenna and pedestal are now re-installed on HMAS Canberra, and Hensoldt has completed the on-board integration and testing, restoring the IFF system to full capability.

Hensoldt Australia’s expanded overhaul capability is available for both naval and commercial testing and overhaul of a wide range of antenna and pedestal systems.—hensoldt/kf/aaa (Photo: Hensoldt)