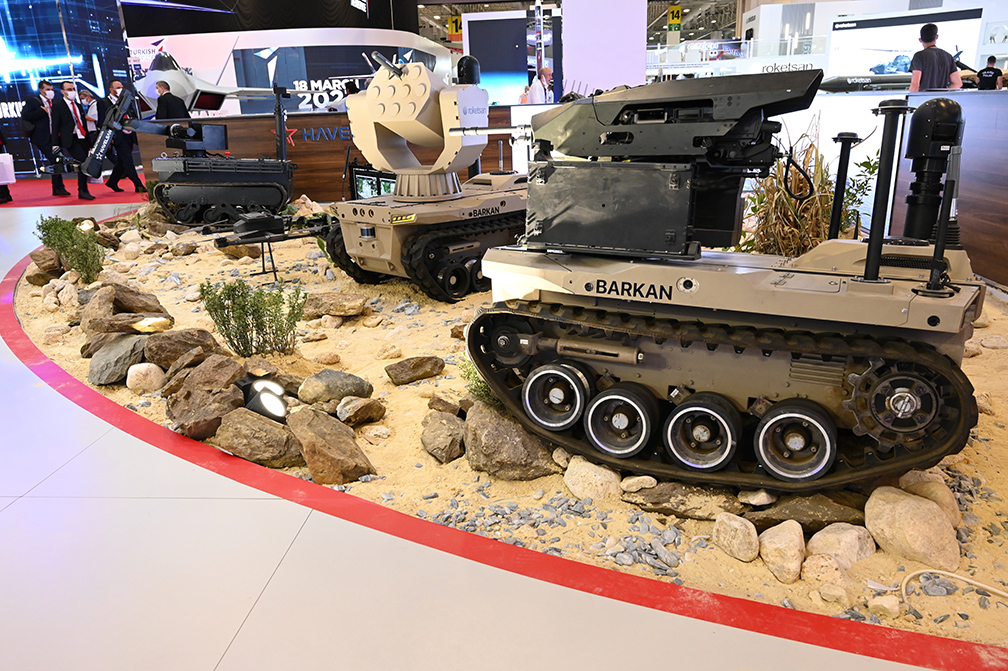 HAVELSAN, one of the leading technology companies of the Turkish defence industry, will present the most impressive technologies of the International Defense Industry Fair (IDEF’21).

Within the scope of the swarm algorithm HAVELSAN’s Digital Troops system in which unmanned autonomous aerial and ground vehicles can perform joint operations will be exhibited for the first time at the show. The major elements of Digital Troops, namely Armed Autonomous Unmanned Ground Vehicle BARKAN, Unmanned Autonomous Aerial Vehicle BAHA and Micro Reconnaissance UAV System M6, will be introduced to the participants at IDEF’21 Exhibition Centre, in Hall 12, at HAVELSAN’s Booth No 1201.

HAVELSAN will also demonstrate its competencies in the field of naval command, control and combat management systems at IDEF’21.

The Airborne Early Warning and Control System “KARTAL” will make its debut to the public at IDEF’21, as well as announcement on the Peace Eagle Project in which it plays an important role.

One of the most important roles that HAVELSAN plays in IDEF’21 will be the provision of this international fair through contact free and digital communication in line with the pandemic conditions.

In addition, HAVELSAN will also make the secure data storage and sharing platform “HAVELSAN Drive” available to users. By scanning the QR codes, users will be able to access all promotional materials that are uploaded to the HAVELSAN Drive Platform by the participating companies of IDEF’21. This contact-free fair experience that HAVELSAN will bring will also be a very important achievement in terms of the digital fair concept of the future.

The Chemical, Biological, Radiological and Nuclear (CBRN) Information System developed by HAVELSAN will be positioned in certain areas of the fairground for the first time at IDEF’21 and will detect CBRN threats and dangers. HAVELSAN as a company adopting a holistic approach to safety and security, plays a significant role in contributing to the safety and security expectations of the IDEF audience through its advanced technologies.

Having developed many technologies for surface and underwater platforms, HAVELSAN plans to present a futuristic work to the public at IDEF’21. In this context, the Submarine Combat Operations Centre (SCOC) concept design, prepared with 3D modelling, will be introduced for the first time at the show.

HAVELSAN will also sign many new agreements during IDEF’21 to expand collaborations. Owing to these agreements, HAVELSAN will not only take the first steps towards new technologies and new markets but also will strengthen its presence in the existing markets.

Another agenda within the scope of IDEF is the panels to be organised by companies. In this context, HAVELSAN’s most important agenda will be the Armies of the Future: Digital Forces panel. The panel will be moderated by Celal Sami Tüfekci, the Vice President of Defence Industries (SSB) and Chairperson of the Board at HAVELSAN. The event will start at 11:00 on Thursday, Aug  19,  2021 at the IDEF panel area.

HAVELSAN exhibits almost 30 products and solutions at IDEF’21 that are developed with high technologies as well as by provision of digital communication support and with its panels and presentations to be held during the fair. –havel/adj/aaa (PHOTOS: HAVELSAN)