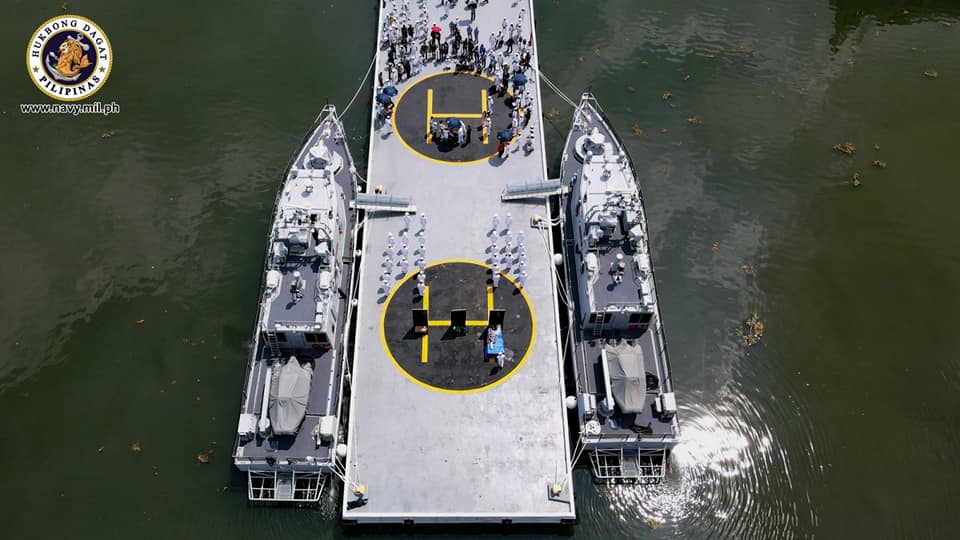 The event was witnessed by Armed Forces of the Philippines (AFP) Chief of Staff, Lieutenant General Bartolome Vicente Bacarro. He was joined by Navy Flag Officer In Command, Vice Admiral Adeluis Bordado, and senior AFP officials.

In his speech, Lt Gen Bacarro lauded this milestone in the AFP modernisation programme that shall strengthen naval capability on littoral defence and maritime interdiction operations, and “decisively forward Philippine’s self-reliant defence posture programme to make the country’s armed forces at par with nations in the region.

“These patrol boats shall significantly enhance our external and internal defence operations in terms of securing our borders against foreign intrusions, and in providing naval warfare support to our ground troops during the conduct of joint operations,” said Lt Gen Bacarro.

The two soon to be commissioned vessels – BRP Nestor Acero  and BRP Lolinato To-ong are part of the nine Shaldag Mk V contracted with the Israel Shipyards Ltd with an approved budget of PHP10 billion ($175 million) inclusive of missile and weapon systems. Three more are slated to be delivered beginning this year while the remaining four units will be constructed at the PN shipyard in Naval Station Pascual Ledesma, Cavite City.

These 32-metre, high-speed vessels are equipped with quick intercept ability, remote-stabilised weapons, and short-range missiles that are capable to deliver precision strikes against larger hostiles and high value targets on land or sea. Four of them will have highly accurate non-line-of-sight (NLOS) missiles that can reach up to 25 kilometres while another four will receive armaments of machine guns and light automatic cannons.

Meanwhile, Vice Admiral Bordado said that the new FAIC-M vessels are designed to enhance the Philippine Navy’s capability in addressing threats within our unique archipelagic composition, at the same time, protect our maritime interests in a rapid and precise manner.

Procurement of the FAIC-Ms were one of the 2019 projects greenlit by former President Rodrigo Duterte in line with the Horizon 2 List of the Revised AFP Modernisation Programme as the FAIC-Ms are anticipated to supplant the fleet of patrol killer medium (PKM) or medium-sized patrol craft. –shp/dl/aaa (Image: PN)