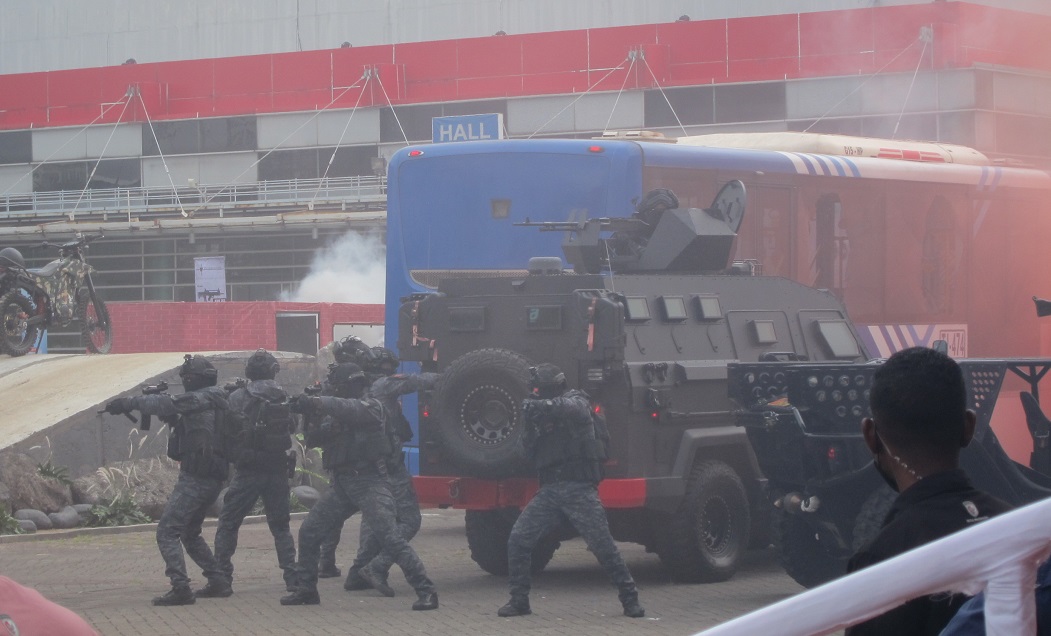 A key part of Indonesia’s defence modernisation programme is the upgrade of major weapons systems focusing on the Air Force, Navy and the Army, Minister of Defence Prabowo Subianto, said in his report to the president. The move has also seen the increased sophistication of the country’s growing defence industry, both government-linked and private owned entities.

Army helicopters and drones also took part in the simulated display which was capped off with a fly past made by two French Rafale fighter jets which streaked through the hazy skies above central Jakarta. The fighters are similar to the “omni-role” combat aircraft type ordered by the government for the Indonesian Air Force which was announced earlier in the year.

The number of local companies and entities involved in the defence business also exemplified the success of the government in establishing a respectable backbone of indigenous capability to support the TNI in both the production of essential equipment and weapons, and maintenance.

The country is among the handful of countries able to produce complete aircraft, albeit under license or joint design of aircraft such as the CN-235 with help from Airbus Defence and Space, is now involved in the joint development of the KF-21 advanced 4.5 plus generation fighter jet with Korean Aerospace Industries (KAI) under a programme backed by both governments.

Hosted by the Indonesian Ministry of Defence, and organised by event management company PT Napindo Ashatama, it is also concurrently held along with INDO AEROSPACE & INDO MARINE, making it one of the largest defence, aerospace, maritime and security events in the world.

Security in the country is also tight with the 17th G20 Heads of State and Government Summit taking place from 15 to 16 November 2022 in Bali, almost back-to-back after the Indo Defence show. Indonesia currently holds presidency of the group of 20 nations.

The country will soon be staging other big events such as the ASEAN Summit next year as it takes over ASEAN chair at the upcoming Asean Summit meetings in Phnom Penh, Cambodia, from Nov 8 to 13. –- adj/mhi/mgm (Photos: MHanif Ismail/MGMahmud)