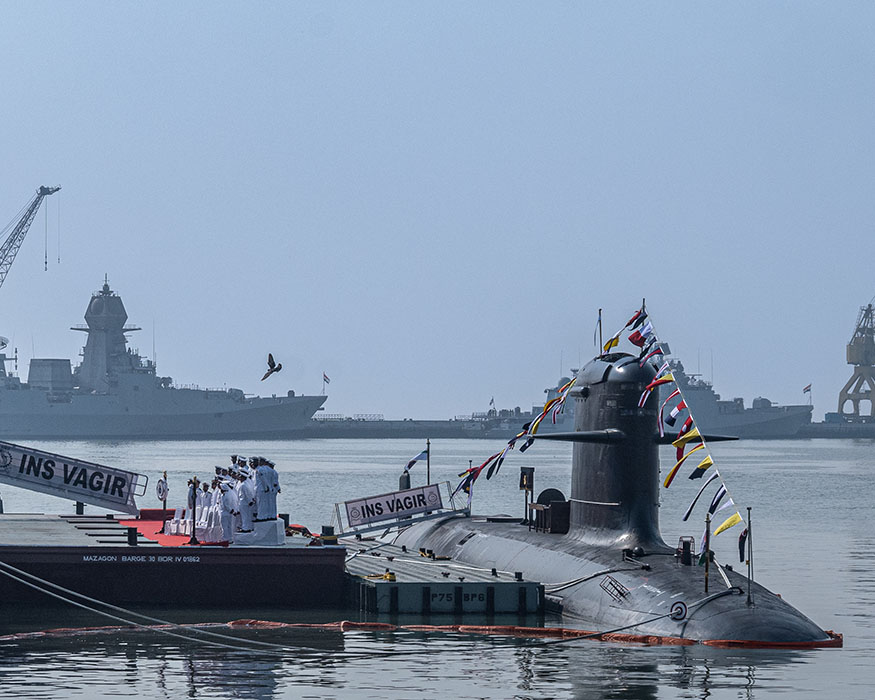 Mumbai: INS Vagir, the fifth P75 Kalvari-class submarines, was commissioned today within the Indian Navy in presence of the Chief of Naval Staff, Admiral R Hari Kumar and several other senior personnel of the service.

Also present the ceremony was Naval Group’s Executive Vice President for Submarines, Laurent Espinasse along with other Naval Group personnel in India.

Espinasse said that Naval Group is proud to be part of the P75 programme and remain fully committed to deliver the last unit of the series and to enhance the level of indigenisation in future projects of the Indian Navy.

Launched on Nov 12, 2020, INS Vagir has successfully completed all her sea trials. She will join four other sister ship in her class – INS Kalvari, INS Khanderi, INS Karanj and INS Vela – which were respectively commissioned in  December 2017, September 2019, March 2021 and November 2021.

Naval Group in a statement said that the last submarine of the P75 series, the Vagsheer, is currently completing her sea trials, and delivery is scheduled in 2024.

The commissioning of INS Vagir highlights the success of indigenous submarines construction programme of the Indian government. Fully built by completely built by MDL,  the programme successfully absorbed the technology transfer from Naval Group, in line with Indian government’s “Make in India” policy.

The series of six submarines of the P75 programme is fitted with a number of equipment built in India by qualified and highly trained industrial Micro, Small & Medium Enterprises (MSMEs). The programme sees the Naval Group-MDL collaboration with 50 Indian companies, along with an Indian subsidiary with more than 70 Indian engineers to support Indian Navy.

Naval Group has been present in India through its 100% subsidiary, Naval Group India which has been established in September 2008. –shp/nvl/aaa (Image: Naval Group)