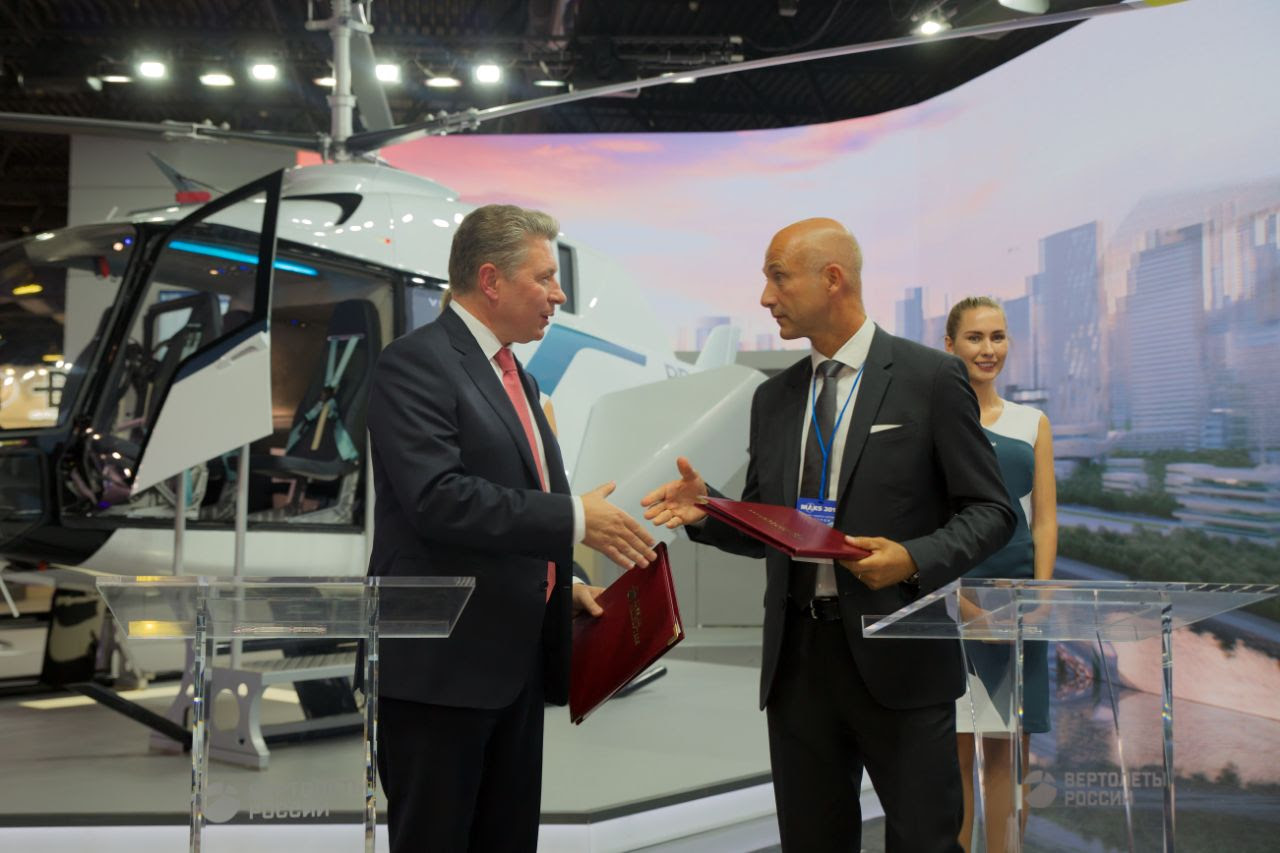 MOSCOW:  VR-Technologies — innovation design office of the Russian Helicopters Holding Company (part of Rostec State Corporation) — has signed dealership agreements on promotion and sales of the light multipurpose helicopter VRT500 with Malaysian company Ludev Aviation. The company plans to start deliveries in 2023. The agreement  was inked during the recently staged International Aviation and Space Salon MAKS-2019.

The Malaysian company Ludev Aviation intends to purchase five helicopters. Optional equipment and details of interior and a livery color scheme of VRT500 will be determined after the helicopter is issued a type certificate and an airworthiness certificate in accordance with the standards of the European Union Aviation Safety Agency (EASA). In early 2019 the technical project of the VRT500 programme was successfully completed, and development of design documents started. Tests of the first prototype will start in 2020, company officials said in late August.

“Europe and Asia are priority potential markets for the VRT500 helicopter. With its performance, the helicopter competes with rotorcraft of the same class used in these regions,” says VR-Technologies Director General Alexander Okhonko.

VRT500 is a light single-engine helicopter with coaxial rotors. Its takeoff weight is 1,650 kg. The aircraft has the largest passenger and cargo cabin in its class, which can accommodate up to five passengers and is equipped with a modern interactive avionics complex. The design solutions of the helicopter will allow it to reach the speed of up to 250 kph, fly up to 860 km and carry up to 730 kg of payload. The helicopter is designed in passenger, multipurpose, cargo, training, VIP and HEMS configurations.

VR-Technologies is an innovation design office of Russian Helicopters Holding Company established in 2014 to offer competitive research and technical solutions in the helicopter industry.

JSC “Russian Helicopters”, a part of Rostec State Corporation, is a leading player in the global helicopter industry, the sole Russian designer and manufacturer of helicopters. The Holding Company was established in 2007 and is headquartered in Moscow. It operates five helicopter assembly plants, two design bureaus, component production and maintenance enterprises, aircraft repair plants and one helicopter service company providing after-sales support in Russia and abroad. The customers of the Holding Company are the Ministry of Defence, the Ministry of Home Affairs, EMERCOM of Russia, and other state customers, Gazpromavia, UTair Aviation company, large Russian and foreign companies.

State Corporation Rostec is one of the largest industrial companies in Russia. It unites more than 800 scientific and industrial organisations in 60 regions of the country. Its key areas of activity are transport engineering, electronics, medical technology, chemistry and innovative materials. Rostec holdings form three clusters: electronics, weapons and aviation. The corporation’s portfolio includes such well-known brands as AvtoVAZ, KAMAZ, Kalashnikov, Russian Helicopters, Uralvagonzavod and others. Rostec is active in the implementation of all 12 national projects. The company is a key provider of Smart City technology, it is engaged in the digitalization of public administration, industry and social sectors, and it is developing plans for the development of 5G wireless technologies, an Industrial Internet of Things, big data and blockchain systems. Rostec partners with leading world manufacturers such as Boeing, Airbus, Daimler, Pirelli and Renault. The corporation’s products are delivered to more than 100 countries worldwide. Almost a third of the company’s revenue comes from the export of high-tech products.