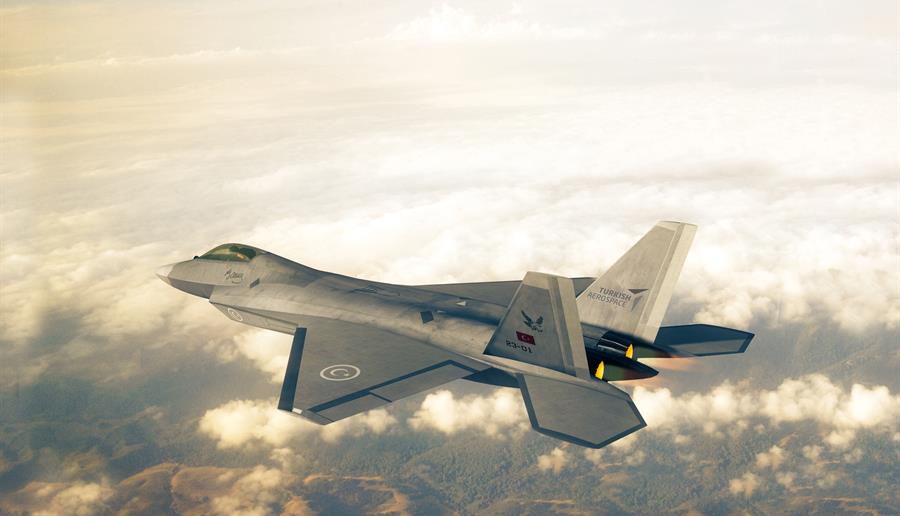 “By the time National Combat Aircraft Development Project is completed, Turkey will have secured its place among the other countries – United States, Russia and China – with the infrastructure and technology required for the manufacturing of fifth generation combat aircraft,” he said.

In his statement, Demir said that defence industry sector carries on with its activities by implementing the highest level of measures against the novel coronavirus (COVID-19) pandemic.

He also said that the MMU Development efforts will continue without slowing down and that Turkish Aerospace and HAVELSAN have signed a cooperation agreement.

He said that the corporation between Turkish Aerospace and HAVELSAN will include embedded training and simulation, training and maintenance simulators, and engineering support in various fields, including in virtual test environments, project-level software development and cybersecurity. Demir stated “By the time MMU Development Project is completed, Turkey will have secured its place among the other countries – United States, Russia and China – equipped with the infrastructure and technology required for the manufacturing of fifth generation combat aircraft.”

General Manager of HAVELSAN, Ahmet Hamdi Atalay said that MMU, as a project, is a source of national pride and will help Turkey “move up a league”.

Saying that there are few countries managing the manufacturing of the fifth generation combat aircraft that will emerge as a result of the project, Atalay stated: “Hopefully, we will be also among those countries. The aircraft’s roll-out is forecast to be in 2023. This is a project for which we will work hard for years to get what we desire.”

As one of the key players in the project, HAVELSAN is all set to ensure the success of this project, given the company’s experience and capabilities. According to Atalay: “We previously wrote million lines of code in various large projects. We completed 10 million lines of code for the Advent Combat Management System, and 15 million lines of code for Turkish Air Force Data System. We had the experience needed to ensure modular development of works at such sizes and operation of those modules at high performance. Our competency in the field of aircraft simulation, on which we have ongoing works as one of the assertive companies in the world, will make significant contributions to this project. We’ve managed to manufacture simulators for various vehicles including F-16 aircraft, trainer aircraft, helicopters and other aerial and ground vehicles of many different types. We think that our experience in the field of simulators will provide contributions and benefits of utmost importance for this project. “

Speaking on HAVELSAN’s role in the programme, Atalay said that as technological, software and operational requirements of the project have been identified, it is now time for the company to play its role.

“As natural consequence of this, a decision involving us in the project was made after evaluations made with business partners including the Presidency of Defence Industries, Turkish Air Force and Turkish Aerospace. Thereupon, we established a directorate whose job is to work only for this project. We assigned one of our staff who previously served in the Turkish Air Force and F-35 project. Hence, we believe that we can make great contributions to this project by combining the experience gained through the F-35 project together with the experience of Air Force and HAVELSAN,” said Atalay.

He said that the size of the work will obviously require the labour of 400-500 engineers. “Ultimate goal of the project will be probably around these figures. The team is currently working within our premises but soon will move to the building to be constructed as a workplace for MMU teams in Turkish Aerospace. The teams will be working there together.”