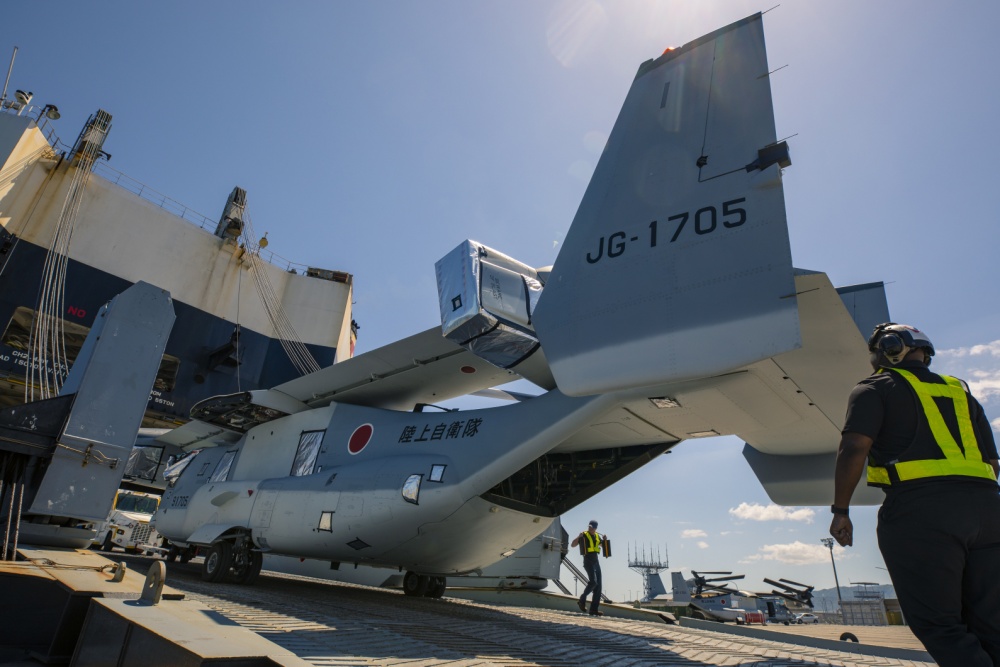 The first two Bell-Boeing V-22 Osprey tilt-rotor aircraft to be used by the Japan Ground Self-Defense Force (JGDF) have arrived at Japan’s Marine Corps Air Station, Iwakuni, on the main Japanese island of Honshu May 8. The Ospreys, carrying the serial numbers JG-1701 (91701) and JG-1705 (91705), were shipped across the Pacific Ocean on a commercial carrier vessel. The platform will be based on a provisional basis at the JGSDF’s Camp Kisarazu in Chiba Prefecture close to Tokyo. However, they will first be maintained and inspected at the US Marine Corps Air Station Iwakuni.

The defence ministry’s Chugoku-Shikoku Defence Bureau said that setting a definitive schedule for the start of maintenance and inspection of the aircraft, as well as their eventual move to Camp Kisarazu was hampered by restrictions on outdoor activities due to the novel coronavirus pandemic. Flight training will also be conducted at Iwakuni ahead of the move. Iwakuni has been a place to unload the aircraft based on the facility’s history accept the aircraft since 2012, before their later deployment to US bases in Okinawa Prefecture.

The Japanese government requested to buy 17 V-22B Block C Ospreys in May 2015 under the US Defence Department’s Foreign Military Sales (FMS) programme. The marks Japan as the first export customer for the platform. Five were contracted two months later in July. The value of that contract was approximately $332 million, according to Japanese defence ministry budget figures.