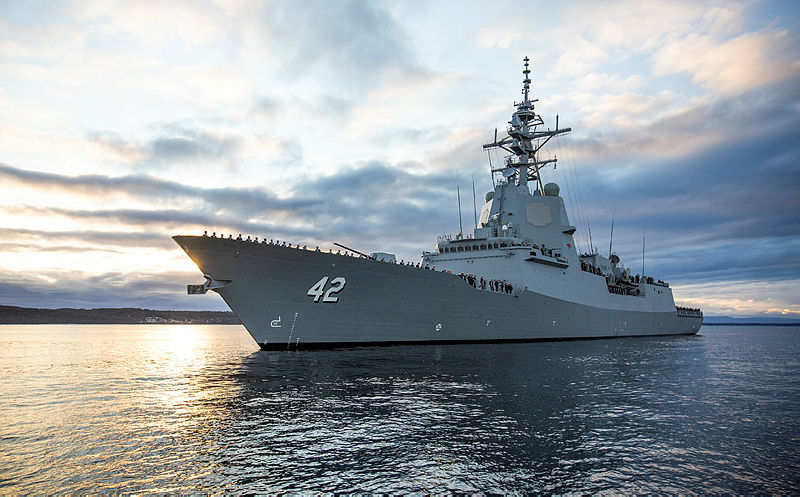 CANBERRA/SYDNEY: Australia’s SEA 4000 Air Warfare Destroyer programme has officially come to an end with the commissioning of HMAS Sydney V (DDG 42) at sea during transit from Jervis Bay to Sydney.

“The commissioning of the final Hobart Class Destroyer not only marks the beginning of a new era for the Navy, but also demonstrates the success of this Government’s Australian Naval Shipbuilding Plan,” Minister Reynolds said May 19. The commissioning ceremony was conducted off the coast of New South Wales earlier Monday.

“The Navy is now equipped with a new level of flexibility and lethality to protect maritime task groups operating in an increasingly complex region, while also allowing us to work even closer with our allies,” she said.

Chief of Navy, Vice Admiral Michael Noonan, AO, RAN, said as the fifth warship to bear this name, she inherits an important legacy.  “Sydney was technically upgraded during her build to integrate the MH-60R “Romeo” Seahawk submarine-hunting helicopter and her Close-in Weapons Systems, making her Australia’s most lethal ship,” VAdm Noonan said.

“She is designed to protect task groups by providing air defence to accompanying ships, in addition to land forces and infrastructure in coastal areas, and self-protection against missiles and aircraft.”

The 6,250 tonne warship is equipped with advanced combat systems, providing destroyer with layered defensive and offensive capabilities required to counter conventional and asymmetrical threats. Her sister ships are HMAS Hobart (III) and HMAS Brisbane (III). The 147-metre Air Warfare Destroyer Sydney is the last of three Hobart Class vessels built for the Royal Australian Navy and is based on the Spanish Navantia F100 frigate design which is also fitted with the US Aegis system.

HMAS Sydney, whose keel was laid down on 19 November 2015, will be home-ported at Fleet Base East at her namesake city. The Hobart class is said to be the most capable Australian ship ever produced in an Australian shipyard, and the most advanced ships ever operated by the Royal Australian Navy.