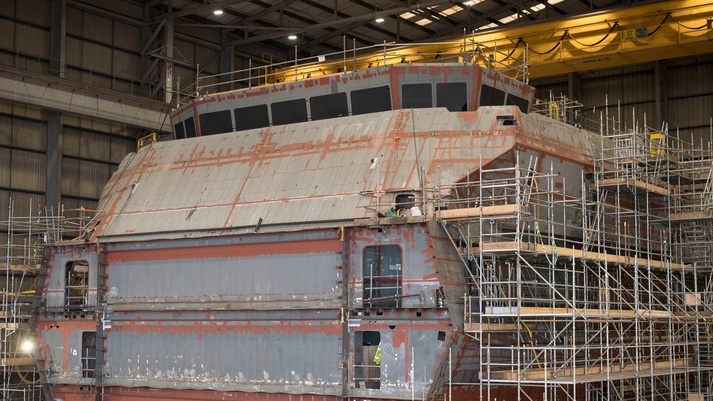 The Type 26 frigate programme continues apace as BAE Systems awarded a further five contracts to suppliers worth more than £100m for support work at the company’s shipyards in Glasgow. The Type 26 is the original variant of the Global Combat Ship. The Royal Australian Navy and the Royal Canadian Navy both selected a variant of the Type 26 design for their anti-submarine frigates.

The new contracts will support 250 jobs, with the Type 26 programme sustaining more than 4,000 jobs in total across the UK, helping to support the nation’s economic recovery by maintaining much-needed skills and capabilities, a company statement said. More than £1bn has been invested across the programme’s supply chain to date, with more than 100 suppliers globally.

The contract awards come as construction on the final unit of the first Type 26 frigate, HMS Glasgow, begins. All 57 units of the anti-submarine warfare ship are now under construction.

The suppliers awarded each of the five new contracts will contribute essential work as HMS Glasgow moves to the outfit phase in readiness to enter the water for the first time.

Secretary of State for Defence Ben Wallace said: “The Type 26 programme has proven itself in terms of cutting-edge design, international defence exports and creating and sustaining British jobs. This latest round of contract awards will see companies from the south coast of England to the banks of the Clyde benefit from over 250 highly-skilled jobs and multi-million pound investment.”

BAE Systems Naval Ships Managing Director, Steve Timms said: “Each of our new suppliers brings a unique capability that is essential to ensure the safe and continued progress of this nationally important programme. It’s fantastic to see the first of class, HMS Glasgow, taking shape at our facilities here on the Clyde. She is a source of great pride for our workforce who have worked with real energy, commitment and innovation in recent months to ensure we meet our customer commitments.”

Designed and built by BAE Systems in Glasgow, the Type 26 frigate is an advanced anti-submarine warship, which will deliver critical protection of the Royal Navy’s Continuous At Sea Deterrent and Carrier Strike Group. The Type 26 builds on the pedigree of the Royal Navy’s current Type 23 anti-submarine warfare frigates which continue to serve the nation.

The Type 26 is the original variant of BAE Systems Global Combat Ship, which supports a close partnership between the Royal Navy, Royal Canadian Navy and the Royal Australian Navy. Australia and Canada both selected a variant of the Type 26 design for their anti-submarine frigate programmes, supporting greater operational, training and intelligence ties between the three nations. – shp/mgm