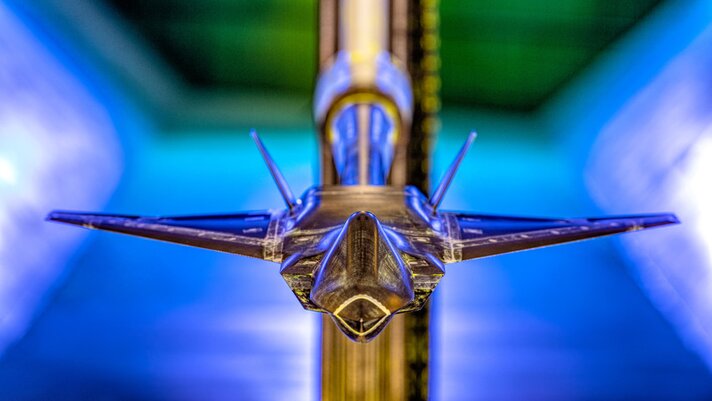 Engineers at BAE Systems are exploiting the digital environment to design, test and fly concepts for Tempest, a next-generation combat air system for the United Kingdom. The concepts demonstrate how leading engineers are embracing one of Britain’s biggest engineering challenges for the next decade faster than ever before using a digital approach., the company said today.

Using the latest digital twin technologies, conceptual shapes for the aircraft have been virtually designed and tested, with high-performance computers able to calculate the aerodynamic performance of different aircraft features and test pilots taking Tempest to the skies from a ground based simulator.

Once digitally tested, scale models were 3D printed and put through their paces at BAE Systems’ world-class wind tunnel facilities at Warton, Lancashire to physically test the aerodynamic properties of the design under harsh wind speeds of more than twice the speed of sound.  Data from these trials is now being used to refine and shape the final design of the UK’s next combat aircraft, which will be in service by 2035, a BAE Systems statement said.

Paul Wilde: Head of Airframe Technologies said: “The digital twin concept we have developed will be used to design, test and support every single system and structure for Tempest. By taking an entirely digital approach to the challenge the UK Government has set us, we’re transforming the way we work and adding incredible value to the programme.

We can achieve what traditionally would have taken a number of months in a number of days.  As a result, we’re working faster for the future and we’re using the virtual environment to create endless opportunities for our engineers to experiment without boundaries, and with open minds – key to the future innovation of the programme,”he said.

The research forms part of a wider UK-led effort to define the requirements for a future air combat system, and ultimately deliver the most advanced engineering project Britain has ever seen. BAE Systems is working closely with Rolls Royce, Leonardo and MBDA as part of Team Tempest to explore more than sixty technology areas in total, experimenting with different ideas ranging from the physical shape of an aircraft to the sophisticated sensors that will become the brains of a future system.

This digital twin concept underpins the entire engineering lifecycle for Tempest. From initial designs, to manufacture and support, the concept will create an open and agile workspace for those involved on the programme. It has also been adopted in the development of a first of its kind Factory of the Future at Warton in Lancashire which BAE Systems is currently using to demonstrate how the future fighter aircraft could be built. Here, data from intelligent robots, supply chain databases and machines is digitally threaded together to deliver increased efficiency and accuracy in the manufacturing process.

Michael Christie, Director, Future Combat Air Systems said: “Designing an aircraft has traditionally been an opportunity which comes up once in someone’s career which causes real challenges of transferring skills and knowledge. The technologies now available to us mean that we can reduce the design cycle which in itself is good for the affordability of a programme but we can also perform more cycles very quickly until we get it right.

The UK Government has set us a significant challenge, but the programme has some of the boldest and brightest minds on board, who are breaking milestones at an accelerated pace and developing technologies and techniques that will be game-changing for the UK defence industry and beyond,” he added.

BAE Systems are using data from the trials, combined with research across the programme and together with its Team Tempest partners to contribute towards the development of an Outline Business Case to be considered by the UK Government, which is scheduled to be the next major decision point on commencing the next phase of a Combat Air Acquisition Programme for the UK. –bae/shp/mgm