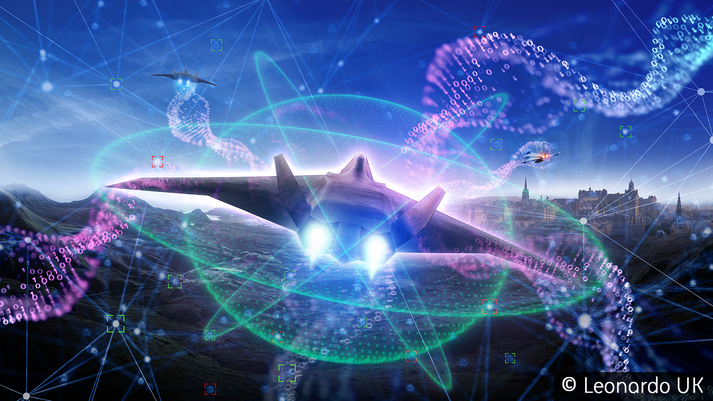 British Engineers have revealed some of the latest concepts under development for the Royal Air Force’s (RAF) Next Generation Combat Air System, it was announced.

The pioneering technology is being delivered by Team Tempest, a UK technology and defence partnership formed by BAE Systems, Leonardo, MBDA, Rolls-Royce and the RAF, and involving hundreds of high-tech companies, SMEs and academia across the UK.

Tempest is one of the UK’s most ambitious technological endeavours and designed to deliver a highly advanced, adaptable combat air system to come into service from the mid-2030s. This next generation combat aircraft, which forms part of a wider combat air system, will exploit new technologies as they evolve to respond to the changing nature of the battlespace, addressing increasingly high-tech and complex threats and conflict.

Experts from the Team Tempest electronics lead, Leonardo UK, are developing new radar technology capable of providing over 10,000 times more data than existing systems. The new sensor, called the ‘Multi-Function Radio Frequency System’, will collect and process unprecedented amounts of data on the battlespace – equivalent to the internet traffic of a large city such as Edinburgh, every second. This huge volume of information, processed on-board, will give Tempest a battle winning edge in combat situations, with the ability to locate and target enemies well before they are targeted themselves.

The brand new sensor will provide a wide range of abilities beyond traditional radar, with all-digital technology providing the operator with an exceptionally clear view of the battlespace and of potential targets. Leonardo has already built complete sub-systems using the new technology and successfully tested them at the company’s site in Edinburgh with a path to airborne demonstrations in the coming years.

Separately, engineers at BAE Systems have begun flight testing cutting-edge concepts for Tempest’s ‘wearable cockpit’ technologies, designed to provide pilots in the cockpit or operators on the ground with split-second advantage. The concept sees the physical controls seen in current aircraft cockpits replaced with Augmented and Virtual Reality displays projected directly inside the visor of a helmet, which can be instantly configured to suit any mission. Concepts including human-autonomy teaming are also being developed, where a ‘virtual co-pilot’ could take on some of the pilot’s responsibilities. The virtual co-pilot concept is still being developed, but could for example, take the form of an ‘avatar’ built into the cockpit to interact with the pilot.

MBDA UK has also embedded one of its Human Factors engineers within this wearable cockpit team, ensuring early introduction of weapons concepts that exploit these future technologies. This close partnership approach between MBDA UK and BAE Systems will allow the companies to help to collaborate at an early stage of the programme, shaping how weapons systems information and operation is optimised for the pilot.

At the same time, Rolls-Royce engineers have been developing advanced combustion system technology as part of the company’s power and propulsion work. The combustion system is where fuel is introduced and burned to release energy into the gas stream. A next generation system will need to be hotter than any previous platform, increasing the efficiency of the engine and meaning it can go further, faster, or produce less carbon dioxide. Rolls-Royce has been exploring advanced composite materials and additive manufacturing as part of this work, producing lightweight, more power-dense components capable of operating at these higher temperatures.

These concepts revealed are part of a wider research effort to develop technologies that could be used to create a next generation combat air system for the UK. Collectively, the Team Tempest partners are developing more than 60 technology demonstrations in the fields of sensing, data management and autonomy to prove world-leading processes and technologies on the programme.

Tempest is an ambitious military programme that is expected to deliver significant benefits to the UK over the full lifetime of the programme. It is a critical programme to ensure the UK is able to sustain its world-leading Combat Air Sector; preserving its sovereign capability and critical skills needed to deliver independent military ‘freedom of action’ and ensuring national security. It will also bring benefits through investment in people, early careers, technology and infrastructure, supporting the economy and long term prosperity of the nation.

“The collaborative relationship between Team Tempest and our network of academic and SME partners enables us to bring together the ‘best of the best’ engineering talent from across the UK. Crucially, we are embracing new ways of working as an integrated team to dramatically improve efficiency and pace – sharing intelligence and refining our concepts digitally to deliver innovations that will shape the next generation combat air system. Our new radar technology is a concrete example of the gains this approach has already brought, costing 25% less to develop while providing over 10,000 times more data than existing systems,” said Ian Bancroft, Leornado UK’s Director of Major Air Programmes. –shp/mgm