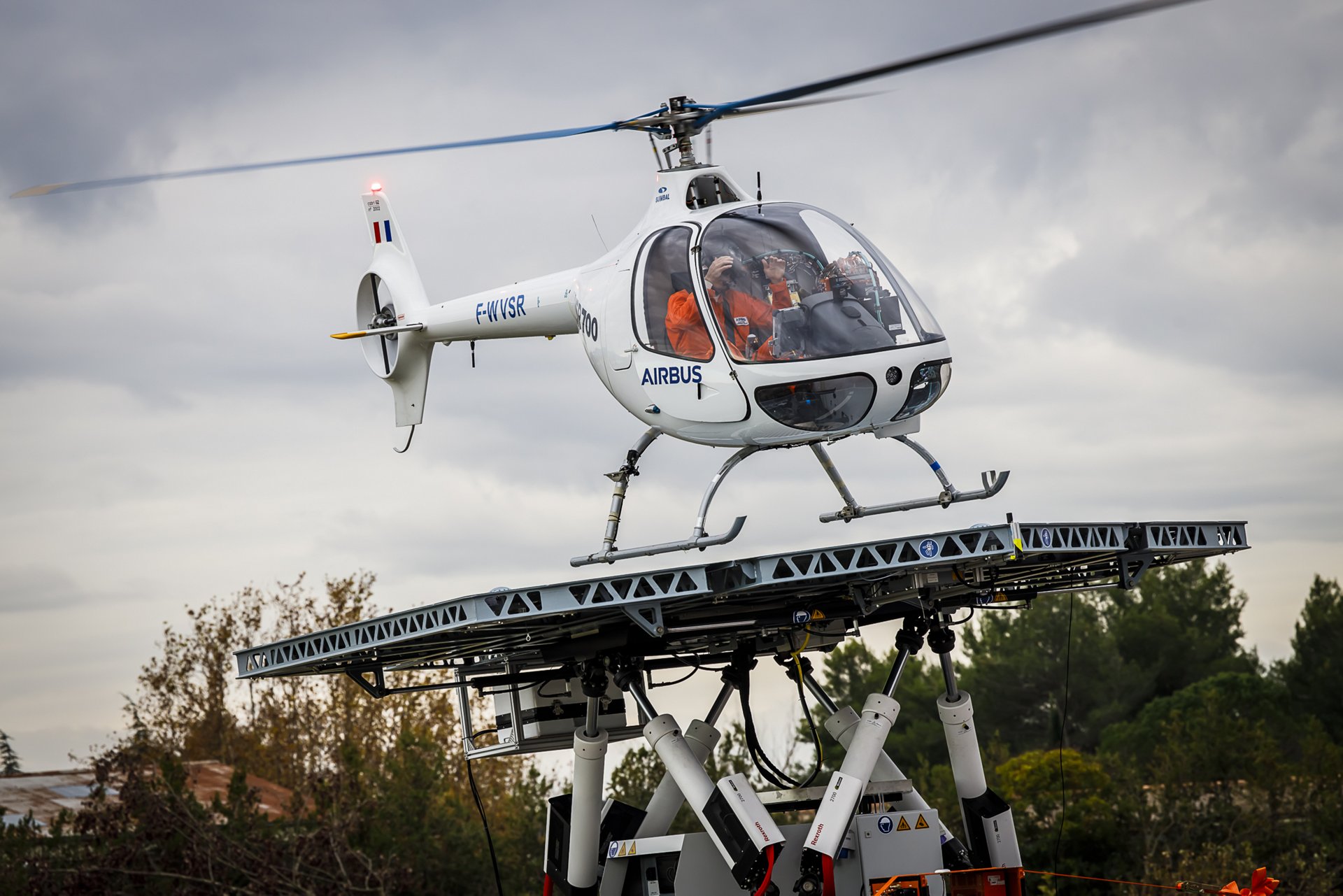 The VSR700 optionally piloted vehicle (OPV) has successfully achieved fully autonomous takeoff and landing (ATOL) approaches, validating its autonomy to and from a moving platform and advancing the VSR700 programme towards its end goal: offering a tactical unmanned aerial system (UAS) with ATOL capacities for global navies. The landing zone: a pitching, yawing platform, mounted on a trailer to simulate the conditions of a moving ship deck, Airbus said Nov 30.

The VSR700 programme began in 2018 when Airbus Helicopters and Naval Group won a contract with the French DGA (Direction Générale de l’Armement) to develop a future tactical drone for the French Navy. Since then, the programme has achieved many milestones in the de-risking phase, including this crucial step of demonstrating the technology needed to perform an ATOL from a battleship.

“A primary challenge for any naval drone is to approach ships in heavy seas as its landing pad moves toward or away from it, on rolling swells that reduce or lengthen the relative distance,” says Nicolas Delmas, head of the VSR700 programme. “Flying in such conditions, the difference of a few centimeters can determine the fate of an entire mission.”

The moving deck trials pave the way for the next major milestone – the forthcoming sea trials with the prototype, known as the SDAM (Système de Drone Aérien pour la Marine). These trials will put the vehicle’s navigation, positioning, flight control and auto-pilot systems to the ultimate test.

“Our programme has a step-by-step approach with quick development loops. This involves rapidly testing new functions with the OPV to get early feedback with a safety pilot onboard for emergencies, before putting these systems on the VSR700 prototype,” says Delmas. “Whereas the VSR700 prototype focuses on the development of vehicle performances, the OPV is primarily used to develop and validate the piloting laws and dedicated ATOL functions.”

In this context, it was on the OPV that Airbus teams developed and matured the automatic flight control system (AFCS) laws which eventually enabled the prototype to achieve an ATOL from a fixed surface earlier this year.

And a second prototype is on the way. Earlier this year, a second SDAM was ordered for the French Navy in the frame of the French stimulus plan, enabling the programme to further secure next steps, such as the development of technologies and refinement of specifications.

Ensuring the autopilot could locate and “talk” to the DeckMotion Simulator was Deckfinder, a local positioning system developed by Airbus Defence and Space that lets manned and remotely piloted aerial vehicles, including helicopters, determine their relative position in harsh environmental conditions.

“DeckFinder transmits the platform’s position in real time to the OPV’s automatic pilot with a very high level of accuracy, which cannot be achieved with classical positioning equipment like a GPS. This accuracy is crucial to achieve the final phase of the approach and the landing on a moving reference like a ship deck to enable the landing,” says Delmas.

After putting the demonstrator through a number of scenarios, including replicating sea state conditions, the test campaign will continue in order to fully validate DeckFinder’s interface with the autopilot and various systems and to get the best from its combination with the AFCS of the VSR700.

The VSR700 has the greatest endurance of any vertical takeoff/landing unmanned aerial vehicle (VUAV) in the 500 to 1,000 kg class today and will be able to carry a full load of high capability sensors, while its compact size means it can be stationed on board frigates and destroyers alongside manned helicopters. It will complement maritime security missions, search and rescue, and anti-submarine and anti-surface warfare, as well as ISTAR (Intelligence Surveillance Target Acquisition and Reconnaissance). –shp/mgm (Photo: Airbus)