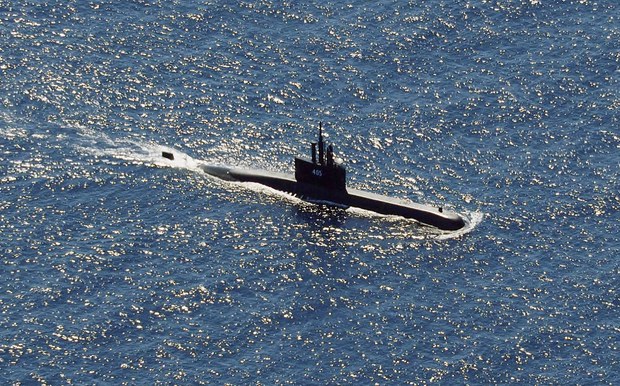 JAKARTA: The Indonesian armed forces are looking for a submarine with 53 crew on board that went missing early Wednesday April 21 when it was conducting excercises in waters north of Bali. Submarine rescue ships from neighbouring Singapore and Malaysia expected to arrive between Saturday and Monday are on the way

The 44-year-old German-made Cakra-class submarine, KRI Nanggala-402, was conducting a torpedo drill in waters north of the island of Bali but failed to relay the results as expected, the Indonesian navy or TNI-Angkatan Laut said.

An aerial search found an oil spill near the submarine’s dive location and two navy vessels with sonar capability have been deployed to assist the hunt, the defence ministry said.

More than 20 navy ships, two submarines and five aircraft were searching the area where the submarine was last detected. A hydro-oceanographic survey ship equipped with underwater detection capabilities also was on its way to the site around the oil spills.

Oxygen supplies onboard were expected to run out early on Saturday morning (April 24), navy officials said April 22, giving rescue teams less than 48 hours to locate the submarine and free the crew in the complex operation.

Reports said it wassuspected that the submarine had descended to a depth of 600-700 metres. The Indonesian navy said it believed the submarine was at a depth of 600-700 meters (2,000-2,300 feet)—around three times deeper than its estimated collapse depth. The KRI Nanggala-402 vessel is thought to have disappeared about 60 miles (100km) off the coast of Bali early Wednesday April 21.