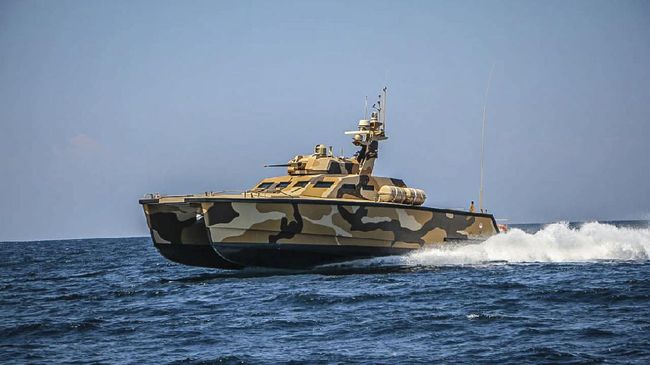 Under Indonesia’s Primary Weaponry Defence System (Alutsista) Procurement programme,             a consortium consisting of PT Lundin (North Sea Boats), PT Pindad, PT LEN, and PT Hariff Daya Tunggal Engineering, with John Cockerill as the turret supplier, the tank boat was developed for the Indonesian Armed Forces (TNI) in conducting patrol along Indonesia’s seas, rivers, and coasts, a take on operations associated with the coast guard. The programme is also being supported by the Indonesian defence ministry.

According to PT Pindad’s statement, the vessel test-fired its 30-mm automatic cannon at  Indonesian Navy’s (Tentara Nasional Indonesia – Angkatan Laut’s TNI–AL’s) Paiton weapons range after having travelled there from Banyuwangi and back, with  the total distance travelled for the trials amounted to 170 nautical miles.

The prototype Antasena tank boat was designed as an 18m-long catamaran-type vessel, launched on April 28, 2021. It has an overall beam of 6.1m and a draught of 1m, can accommodate up to 60 passengers and five crew members, has a top speed of 40 kt and a maximum range of about 600 nautical miles at 9 knot.

Several countries have shown interest in the system including Russia, which, according to the Russian ambassador to Indonesia, has placed an order. Others are India, Greece, UAE and the Philippines. – pindad/kf/aa (Photo: PT Pindad)