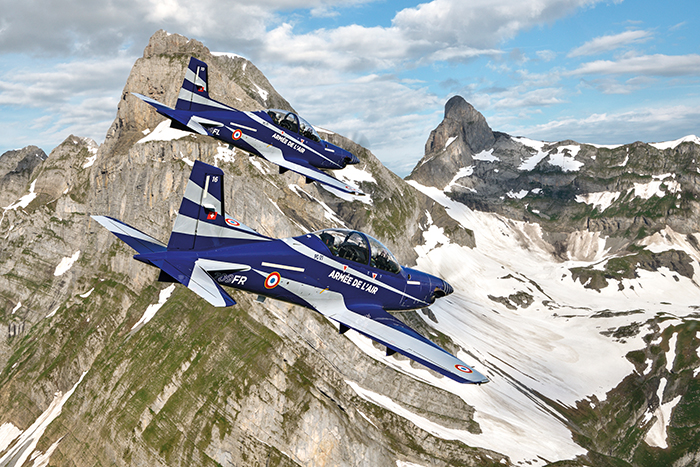 The French Air and Space Force boost its training capabilities with the order of a further nine Pilatus PC-21 trainers. The platform will be deployed to train future military pilots who will subsequently step up to the nation’s multi-role lead-fighter. The PC-21s will replace the twin-engine jet trainers which were previously used for pilot training.

The French Air and Space Force purchased 17 PC-21s in 2017 and has successfully trained its future military pilots on the world’s most modern training system since then.

The French procurement authority, DGA, signed the agreement with F-AIR 21 (Cognac Formation Aero SAS France), with Pilatus acting as the exclusive subcontractor for the supply of the nine PC-21s and other ground-based training systems and spare parts, said Pilatus in a statement.

Pilatus Aircraft CEO, Markus Bucher says of the agreement: “French evaluations are highly professional, which again proves to us that we offer the world’s best training system in this market. I am delighted that the Armée de l’air et de l’espace has opted for further PC-21s.”

The PC-21s will be stationed at the Cognac-Châteaubernard air base from 2023, where the platform has been in use since 2018. The first pilots concluded their training in 2020. With the latest order, the PC-21 fleet will increase to a total of 26.

Besides Switzerland and Spain, France is the third European nation to adopt the PC-21, the world’s most advanced training system. Over 230 PC-21s are now in service with nine air forces worldwide. The PC-21 is also used to train future test pilots at the Empire Test Pilots’ School in Boscombe Down, England.

In Asia-Pacific, the PC-21 is in service of the air forces of Australia and Singapore. –adj/kf/aaa (Photo: Pilatus)