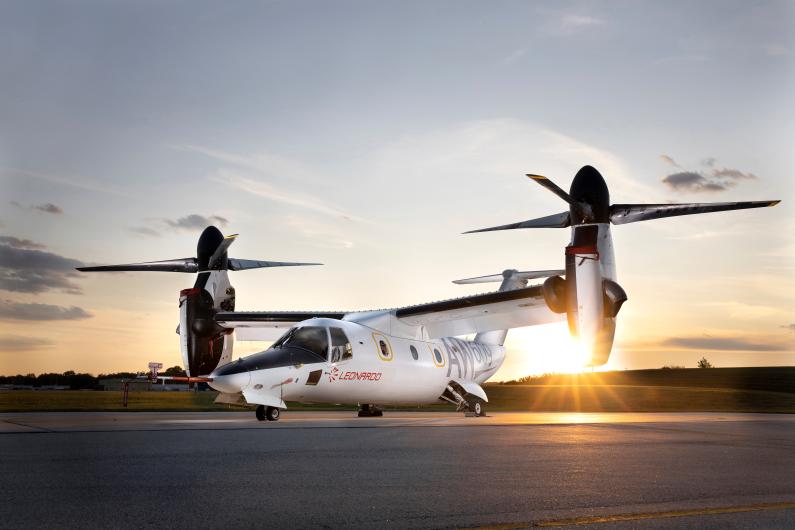 With the AW609 leading the company at Dubai, Leonardo’s participation at the air show is centered on the future of flight, advanced electronics, helicopters and defence technologies.

The Italian-headquartered global aerospace and defence company, presented its revolutionary AW609 tiltrotor for the first time in the region at the 2021 Dubai Airshow (14-18 November). At the event, Leonardo displayed some of its most advanced technologies, including the only tiltrotor in the market set to receive civil certification.

At the UK Pavilion, Leonardo is presenting its gold-standard aircraft protection technology in the form of BriteCloud and Miysis DIRCM as well as advanced electronics for airborne surveillance, represented by its Osprey AESA radar and SAGE electronic support measures system. BriteCloud is a countermeasure for combat, transport and special mission aircraft that provides latest-generation protection from radar-guided surface-to-air and air-to-air missiles.

Fired like a flare, it contains a powerful miniature jammer that seduces incoming missiles towards BriteCloud as it falls away from the aircraft, ensuring that the missile detonates far away from its intended target. Then for protection against InfraRed (IR)-guided threats, Leonardo’s Miysis DIRCM uses a high-powered laser to “dazzle” incoming missiles, forcing them away from their intended target. Leonardo’s decades of experience in laser and precision targeting enables this to happen at lightning-fast speed, allowing Miysis to defend against multiple, simultaneous incoming missiles.

Ensuring that aircraft crews have access to the highest level of situational awareness, the Osprey radar offers multi-domain AESA capabilities, meaning it can support a wide variety of missions and provide maximum field of view on a variety of platforms – be they fixed wing, rotary wing or uncrewed. For customers looking for an electronic intelligence capability, the Leonardo SAGE system delivers a unique level of situational awareness to operators. Notably, the system has been integrated into the General Atomics Aeronautical Systems, Inc. MQ-9B SeaGuardian Remotely Piloted Aircraft System (RPAS) and is being offered to customers as a fully-integrated capability on-board that system.

Leonardo’s technologies have been contributing to the security and defence of the Emirates for over fifty years and the Company continues to work – via its local branch in Abu Dhabi – with the UAE government, Armed Forces and partners. Leonardo technologies have equipped Emiri Armed Forces as far back as the mid ‘70s, with the supply of SF-260 basic trainers and OTO 76/62 naval guns. Since then, Leonardo has provided integrated naval systems for combat management, defence systems, naval radars, fire control systems, missile electronics and military radios for more than 40 ships in the UAE, including Ghannatha, Baynunah, Falaj 2 and Abu Dhabi-class corvettes.

Based on this track record, last February Leonardo announced it submitted an offer to Tawazun proposing itself as partner for the design and development of the UAE national Combat Management System, which will be the pillar of the UAE Navy’s future naval assets and it will ensure the legacy for the progressive upgrade the existing fleet. Leonardo high-tech platforms in the UAE include more than 100 helicopters, secure communications applications, space technologies and training aircraft, including the Aermacchi MB-339 jet trainer, chosen for Emirati national aerobatic team Al Fursan. Leonardo is proud that the Al Fursan pilots have trained in Italy, using the company’s aircraft and teaching systems.

In fact, Leonardo is a world leader in the training sector thanks to its M-345 and M-346 and can cover the entire pilot training syllabus. The new Fighter Attack version of the M-346, already delivered to its first international customer, retains all the characteristics of the advanced trainer version while also being a light fighter aircraft capable of carrying out a wide range of operational missions at far lower costs than other front-line fighters. As advanced pilot training continues to be needed in the region, Leonardo is ready to host students at the International Flight Training School (IFTS), a strategic collaboration between the Italian Air Force and Leonardo. Just a few weeks ago the IFTS announced its third customer and an expanded IFTS campus is under construction at Decimomannu Air Force Base in Sardinia. This will be an advanced flight academy able to host students and technical staff, with facilities including accommodation, recreational areas, a cafeteria and sports facilities. Its infrastructure will underpin the operations of a fleet of 22 M-346 aircraft (designated T-346A by the Italian Air Force). An entire building will be home to the Ground Based Training System (GBTS), with classrooms and a modern training system based on latest-generation simulation equipment.

Leonardo is a leader in military pilot training, offering a turnkey training solution including platforms, systems and services that guarantees the highest standards of quality at every stage of training to customers worldwide including the Asia-Pacific. In the UAE, Leonardo has provided more than 100 helicopters, advanced naval technologies, secure communications, space technologies and training aircraft.

“In 2019, the Dubai Airshow was the last major Aerospace and Defence event before the pandemic – says Pasquale Di Bartolomeo, Leonardo Chief Commercial Officer –: and this year’s edition, taking place as we start to emerge from the global emergency caused by Covid-19, is going to be an important showcase for Leonardo. We are sure that the event will be a success even in a time of ongoing caution, just like the Emirati government’s hugely impressive and safe Expo 2020 Dubai which Leonardo is currently proudly contributing to. Our partners in the UAE and in the whole Middle East continue to be of great importance to Leonardo and we believe that the Dubai Airshow will give us the chance to further strengthen these ties and pursue a range of business opportunities.”

That close relationship between Leonardo and its regional partners is behind the company’s choice to present the AW609 tiltrotor at Dubai Airshow 2021, marking its first appearance at an aerospace and defence exhibition outside Europe and the U.S. The AW609 is an impressive feat of engineering: with its ability to change the position of its two rotors in less than 60 seconds, it can take-off vertically like a helicopter while performing in-flight like an aeroplane. Capable of carrying out a variety of missions, from passenger transport and medical care to civil protection and search and rescue, the AW609 can fly at over 500 km/h. It has a range of almost 1,400 km, which increases to over 2,000 km with auxiliary tanks. The AW609, on display at the Dubai Airshow, was flown to Dubai for the opening ceremony of the innovative helicopter terminal, built by Leonardo in partnership with Falcon Aviation Services at the Expo 2020 Dubai site. Here the company also launched “Agusta”, reinvigorating the iconic helicopter brand as the marker for Leonardo’s VIP transportation products and services.–shp/adj/mgm (Images: Leornado)