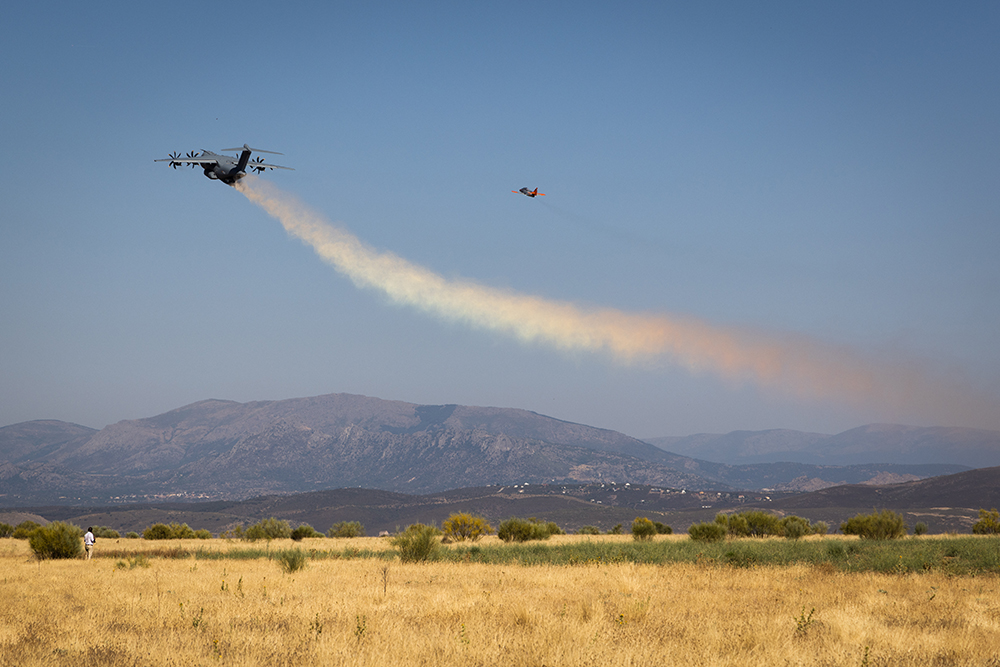 The test campaign took place in daylight conditions with a minimum operating height of 150ft, flight speeds as low as 125 knots and drops involving up to 20 tonnes of water from the current tank in less than 10 seconds. The main objective of the campaign is to validate the drop water quantity and time as well as the ability of the A400M to carry out this new role with the kit.

The development of this prototype and the tests have been carried out in close collaboration with the 43rd Group of the Spanish Air Force, as well as European authorities in Firefighting operations and the Ministry for Ecological Transition and Demographic Challenge (MITECO).

“The development of this firefighting kit is an intrinsic part of our journey towards helping to create a more sustainable and safer world, not only by our actions but also through our products. We strongly believe the A400M can play a vital role in the fight against the ever increasing threat posed by wildfires and support the restoration of social and environmental systems,” said CEO of Airbus Defence and Space, Mike Schoellhorn.

The Airbus firefighting solution created for the A400M is a roll-on/roll-off (RORO) kit that requires no modification to the aircraft and therefore is interchangeable to any aircraft in the A400M fleet. The water is stored in a fixed tank in the cargo hold, and retained by two independent doors. These doors are connected to two flood pipes, so when the discharge is triggered, the water is expelled through two sections at the end of the ramp. The introduction of this RORO solution allows a rapid reaction to unforeseen fires and reconfiguration of the aircraft to any of its other roles.

Due to its low-level flight capability and manoeuvrability at low speeds, the A400M can accurately drop payloads of water at very low heights, down to 150ft. In the future, in addition to the development of the production version of this kit, Airbus will analyse this operation also in night time conditions, reinforcing the efficiency and effectiveness of the mission.

The A400M transport aircraft has been chosen by many armed forces in the world for troop and cargo transport, medevac, and  has proven its operational capability in humanitarian assistance and disaster relief missions. The aircraft in service with the armed forces of Belgium, Germany, France, Luxembourg, Malaysia, Spain, Turkey, and United Kingdom. Malaysia is the first nations beyond the OCCAR fraternity to procure four aircraft in 2005.

Kazakhtan has ordered two aircraft in September 2021, with expected delivery in 2024.

Indonesia will be the second ASEAN nation to operate the aircraft with the order of two aircraft in November 2021, with for more under option. –shp/ air/aaa (Image: Airbus, RMAF)