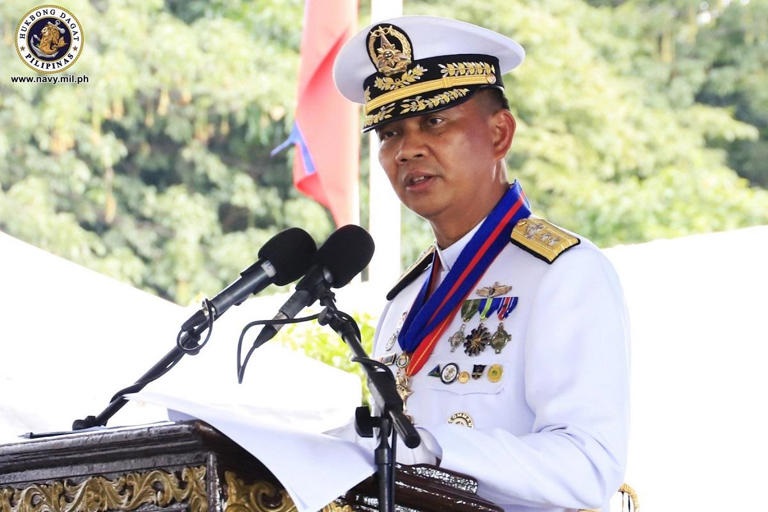 The Philippine Navy received a new commander upon the retirement of Vice Admiral Adeluis Bordado. His deputy, Rear Admiral Caesar Bernard Valencia took over the helm as acting navy chief before a formal appointment of the 40th Flag Officer in Command.

The change of command and retirement ceremonies took place at the Philippine Navy headquarters in Manila, presided over by the Department of National Defence Officer-In-Charge, Senior Undersecretary Jose Faustino Jr as the guest of honour.

As the acting FOIC before the successor is elected by the President, Admiral Valencia vowed to carry on the work of his predecessor to realize the Navy’s bright future. As the Navy sails towards the vision year in 2028 to achieve modernity and multi-capability, the Navy promises that the Navy still has room for improvement and will be improved. “Despite numerous achievements over the years, the best is yet to come,” said Admiral Valencia.

Admiral Valencia is a graduate of the Philippine Military Academy’s class of 1990 and has held several key positions including Chief of Naval Staff, Commander of Naval Forces Northern Luzon, which is an operational command that oversees the maritime area of the entire Northern Luzon. Aside from that, he commanded the Offshore Combat Force and led the charge on various big-ticket acquisitions for the Navy, procurements ranging from offshore patrol vessels, frigates and corvettes.