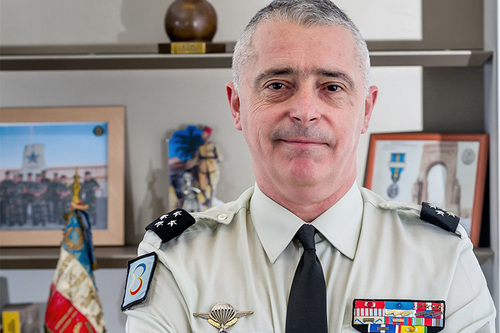 General Bernard Barrera will join Thales as the Group’s Land Defence Advisor, with effect from 1 November 2020.He takes over from General Alain Bouquin, who will step down from his role with Thales on 31 December 2020.

General Bernard Barrera is a graduate of the Saint-Cyr military academy (Général de Monsabert cohort, 1985). He passed the École de Guerre staff college in 1998 and is a former member of the IHEDN institute for higher national defence studies (61st session, 2008). In his career with the infantry forces, he served as a commander in France and on overseas deployments, most notably in Mali, where he led ground operations for Operation Serval in 2013. He also served as an adviser to the French Prime Minister (2009–11) and at the Ministry of Defence’s information and communications department (DICoD).

Having drafted the fundamental principles of collaborative combat and guidance for the French cooperative fighting system (BOA) at France’s Land Forces General Staff (2000–04), he led the implementation of those principles under the Scorpion transformation programme as Deputy Chief of Plans and Programmes in 2015. Also at the General Staff, he set out “Action Terrestre Future”, a forward-looking vision of land forces operations to 2030, organised the ramp-up of airland equipment procurement and coordinated the modernisation of the General Staff in the areas of cybersecurity, digital technology and innovation.

Bernard Barrera was promoted to Deputy Chief of the Land Forces General Staff in December 2017 with responsibilities spanning Army policy, operational processes and capability development. He was appointed Army Inspector General in early 2020.

As Land Defence Advisor, he will provide key support for Thales on issues in land defence. Crucially, he will also help to better understand military requirements and advise the Group on equipment and system roadmaps, with a particular emphasis on future land combat in a European and joint forces context.

Patrice Caine, Chairman & Chief Executive Officer, said: “We are delighted to welcome General Barrera to Thales. His experience as a commander of French forces and ministerial advisor is a major asset for the Group in its effort to provide the armed forces with the very best technologies available. I also thank General Alain Bouquin most sincerely for the essential support he has provided to the Group over the last five years.” –shp/mgm