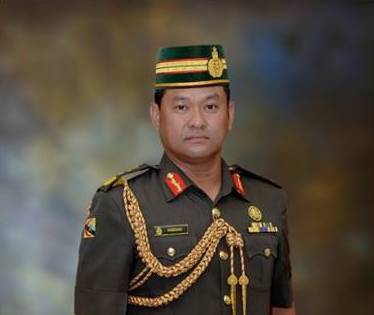 Brigadier Gen Muhammad Haszaimi Bol Hassan was officially appointed as the new commander of the Royal Brunei Land Force (RBLF) in a change of command ceremony held on July 30.

Brig Gen Muhammad Haszaimi Bol Hassan joined the RBLF in June 1993. Upon completion of officer training at the Officer Cadet School, New Zealand in 1994, he was promoted to the rank of second lieutenant where he served as an infantry platoon commander at the 3rd battalion RBLF.

He has attended courses at the Australian Land Warfare Centre in 1999, Australian Defence College in 2007 and the Royal College of Defence Studies (RCDS) in the United Kingdom from 2012 to 2013. He was appointed as the Chief of Staff of the Royal Brunei Land Force in September 2013. Promoted to the rank of Colonel in May 2014, he was then appointed as Deputy Commander of Royal Brunei Land Force from 2014 to 2017 and as Commandant of Training Institute Royal Brunei Armed Forces in 2018 until 2020.