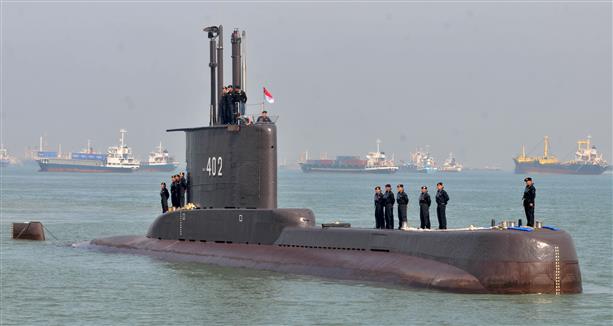 BALI: Indonesian armed forces chief Hadi Tjahjanto has announced that crew members on board a sunken Indonesian submarine have been confirmed dead, with parts of the vessel found on the seafloor, a day after flotsam were recovered from the suspected location of the missing vessel declared “lost” by the navy.

Air Chief Marshal Hadi said search vessels had received “visual images” which have been confirmed as parts of the KRI Nanggala 402 submarine, such as the rear vertical rudder, anchors and the external section of the pressure hull.

“Therefore, with deep sadness, as the commander, I declare that 53 KRI Nanggala 402 personnel have fallen,” ACM Hadi said at a press conference here, that was televised live of local television today (April 25).

The submarine was found at a depth of 850 meters and had broken into three parts after “magnetic “objects were located, Indonesian Navy Chief of Staff Yudo Margono said. The vessel’s collapse depth was estimated at 200 metres (about 655 feet) by a South Korean company that refitted the vessel in from 2009 to 2012. The cause of the incident is still uncertain. Earlier, the navy said an electrical failure could have left the submarine unable to execute emergency procedures to resurface.

The KRI Nanggala 402, a Type 209 German-made submarine, went missing after its last reported dive during an exercise Wednesday off the resort island of Bali.  Patrol aircraft and about a dozen Indonesian navy ships and also from neighbouring countries such as Singapore, Malaysia and Australia took part in the search.

In a statement Sunday, President Joko Widodo said: “The army and navy have changed the status of the KRI Nanggala 402 submarine from having lost contact to being ‘sub-sunk’ or drowned. “This tragedy shocked us all. Not only the families of the 53 crew members and the navy, but also the entire people of Indonesia.”

It was reported that the Indonesian government will work with the International Submarine Escape and Rescue Liaison Office (ISERLO) to conduct the complex operation of salvaging the submarine, if a decision is made to do so. The area of interest is about 40 kilometers (approximately 25 miles) north of Bali .– adj/kf/aaa/mgm (Photo: TNI-AL)