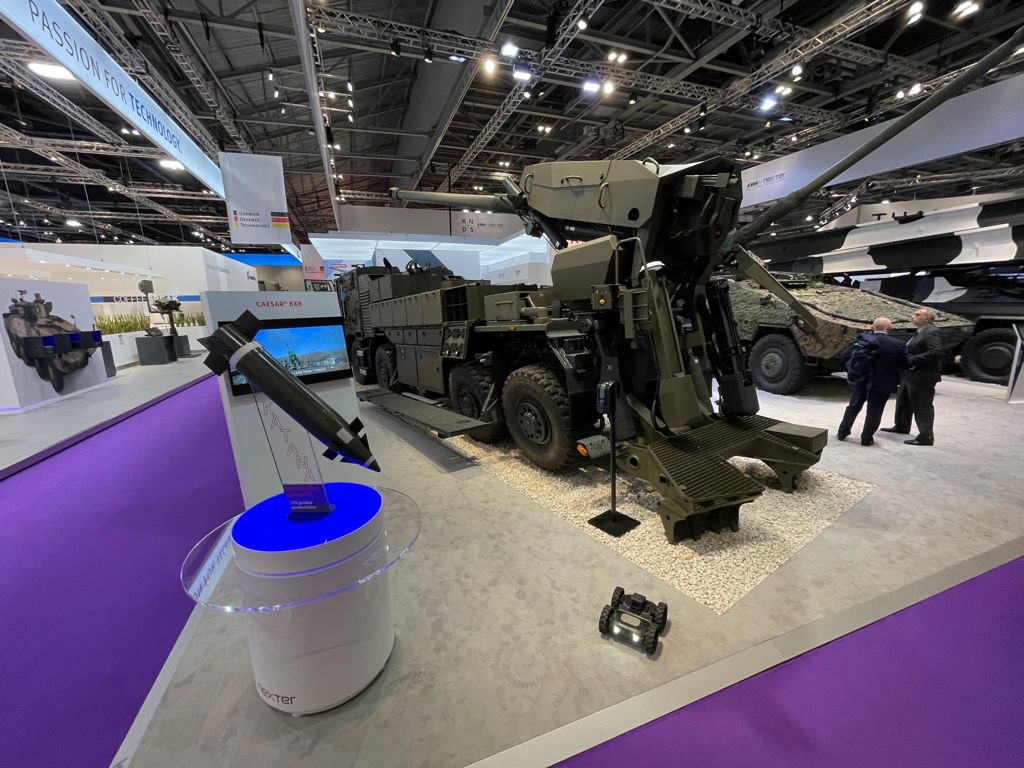 At DSEI, Nexter is showcasing the CAESAR self-propelled gun in its eight-wheel drive version (8×8).

The CAESAR 8×8 is Nexter’s answer to the British Army’s need for the Mobile Fires Platform (MFP) programme. This heavy artillery system inherits CAESAR 6×6 version’s qualities and maturity, which is recognised for its low logistical footprint, robustness and stealth in operation.

Suited to high-intensity combat, the CAESAR 8×8 chassis carries a larger load (up to 30 rounds of ammunition compared with 18 for the 6×6 version) and its automatic loading system reduces operator fatigue. The CAESAR 8×8 is  in production at the Roanne site for the Danish Army, which will take delivery of the 14th unit at the end of September 2021, said Nexter in a statement.

Nexter offers a complete range of conventional and smart 155mm artillery ammunition, providing 52-calibre guns excellent performances in terms of range, accuracy, lethality and safety. The LU211 shells are specifically developed for CAESAR systems: they are twice as lethal as M107 shells and can reach a range of up to 40km. Nexter also produces smoke (LU214, LU217) and illuminating shells (LU215, LU216).

The range is completed by the 155mm BONUS anti-tank shell, which already equips several NATO armies, including the US Army, and the 155mm KATANA precision-guided ammunition. In addition, a large sample of the ammunition catalogue can be seen on the stand: 20, 25, 30 and 40mm CT medium-calibre ammunition alongside 40, 76 and 127mm naval ammunition, 120mm tank ammunition, as well as soft kill and reactive protection solutions.

Nexter is also presenting two scale models on which the 40CT gun from CTAI (joint venture between BAE and Nexter) is integrated. First, the JAGUAR armoured reconnaissance and combat vehicle (EBRC), developed as part of the SCORPION programme with the French defence procurement agency (DGA), in a consortium with Arquus and Thales, will replace the AMX10RC, ERC90 and VAB HOT to better meet the current and future threats faced by the French Army.

Nexter is the design authority and provides the main armament of the JAGUAR with the CT40 turret, which integrates the 40mm cannon, the associated telescoped ammunition and the onboard electronics. The qualification of the JAGUAR is progressing well, with major milestones such as the first firing of an MBDA medium-range missile (MMP) in April 2021, the first qualifying static firings of the turret in September 2021 and the scheduled delivery of the first units by the end of 2021.

Finally, Nexter also showcases the RapidFire naval turret designed with Thales, also armed with the 40CT, has been selected to equip the French Navy’s new generation of ships with a close-in self-defence capability against modern air and surface threats (drones, aircraft, light vehicles).