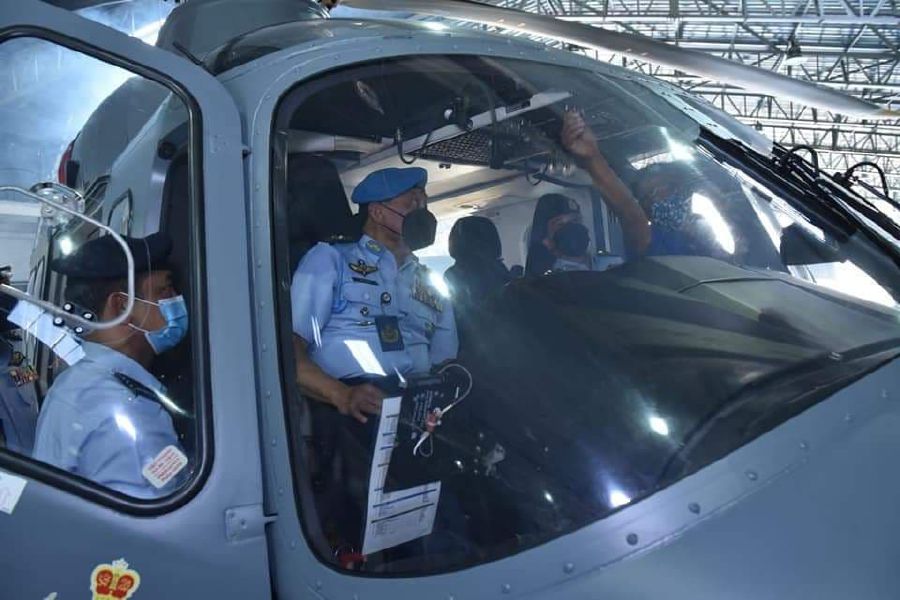 KUALA LUMPUR:  All four Leonardo AW139 utility helicopters for the Royal Malaysian Air Force (RMAF) are expected to be deployed and operational after the delivery of the second batch of the type in April.

This followed a visit by Chief of Air Force Gen Ackbal Abdul Samad to Butterworth Air Base in northern state of Penang.  He said that two of the AW139 utility helicopters have already been delivered on Dec 4 last year.

The remaining two were expected to be handed over on Feb 1 and April 21, respectively, he said in an RMAF social media posting on the visit.  All four helicopters will operate from the RMAF’s No 3 Squadron based at Butterworth, Penang.

No 3 Squadron used to operate dozens of Nuri (Sikorsky) S-61A4 helicopters in support of security forces in the northern peninsula during the height of the second communist insurgency in the `1970-80s. Deployments tapered off in numbers due to attrition and obsolosence until its grounding by the air force in batches in 2019-20.

“We have trained and initial batch of eight pilots and four air-quartermasters at the PWN Excellence Sdn Bhd’s full-flight simulator (at the Malaysia International Aerospace Centre) in Subang near here.

Another batch of engineers and technicians had also undergone training at the Leonardo facility. “They will form the nucleus team to train other cockpit, cabin and maintenance crew,” he said after the Jan 22 visit.

It was announced that the RMAF will be using the AW139 as an interim measure to meet its operational requirements, under the Government-Operate-Company-Owned and Maintained (Gocom) concept, in an agreement with Weststar Aviation Sdn Bhd through an open tender.

The RMAF decided to incorporate the ‘”Gocom” concept to keep operating costs down, in its bid to achieve its mission objectives. Gen Ackbal said leasing was a short-term, stop-gap solution in its long-term plan to eventually acquire a fleet of 24 new utility helicopters including some with combat-search and rescue capabilities.

The Leonardo AW139 is also being operated by several enforcement agencies in the country, like the police, Fire and Rescue Department, Malaysian Maritime Enforcement Agency and the Royal Malaysian Navy (RMN). It was reported that the RMN had taken delivery of one of three maritime versions of the AW139 from Italy, with the rest scheduled to be delivered by 2024. – adj/mhi/mgm (Image: RMAF/ Gen Ackbal in cockpit of the AW139)