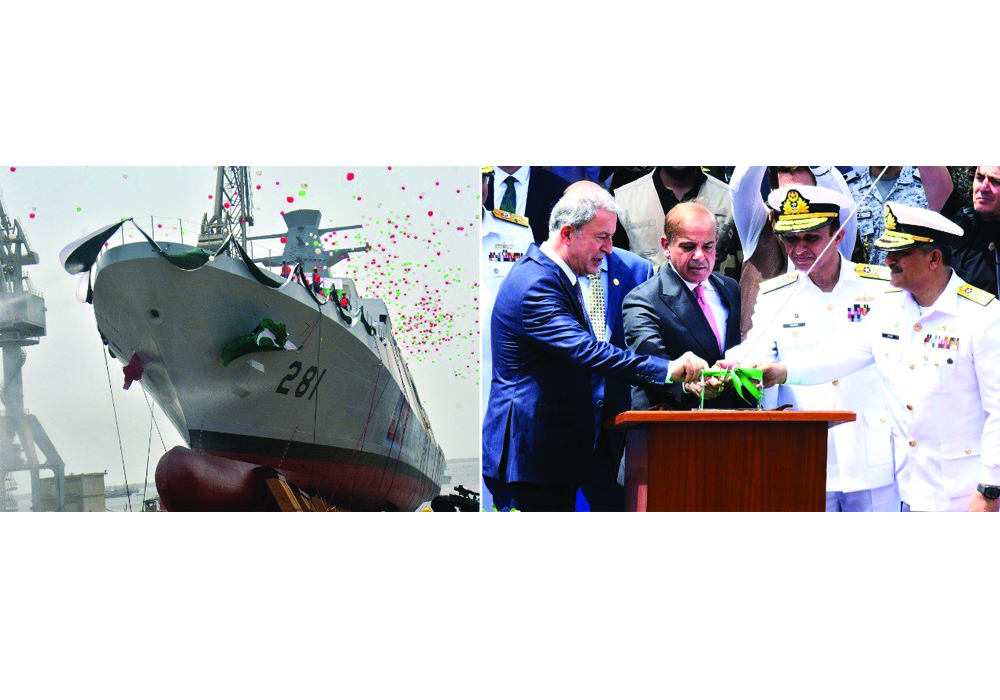 The newly launched corvette is equipped with state-of the-art weapons and sensors including surface to surface, surface to air missiles and anti-submarine weapons, which is meant to boost Pakistan Navy’s naval warfare capabilities. Contract for construction of four Milgem corvettes for Pakistan Navy was signed between Directorate General Munition Production and M/s ASFAT in 2018; wherein, two ships will be constructed at Istanbul Naval Shipyard (Insy), Turkey and other two ships at KS&EW, Pakistan. The first ship of the project, PNS Babur was launched at Turkey in August 2021.

The Prime Minister Muhammad Shehbaz expressed his appreciation on the performance of KS&EW in finishing the shipbuilding programme. He reiterated that indigenisation is at the forefront of Pakistan’s national policy and it is very encouraging to see modern warships being built in-country. He also highlighted that the Milgem project will enable acquisition of much needed design and construction capability for future needs and export potential.

Turkish President Recep Tayyip Erdogan in his message on the occasion extended felicitation on timely completion of ongoing Pakistan-Turkey project despite the challenges brought upon by the COVID-19 pandemic. He highlighted that the Milgem project is the manifestation of deep-rooted historical ties and willingness to share of expertise in the defence industry between the two brotherly countries.

The Naval Chief underlined that Pakistan Navy’s Milgem-class ships will play an important role in catering operational needs of Pakistan Navy. He highlighted that Karachi Shipyard is one of the few public sector organisations that made remarkable turnaround during last decade. Growth of such a heavy engineering and shipbuilding complex, paves way for broadening technological base of the country in maritime domain, which is essentially required for future development of Pakistan.

Managing Director of KS&EW, Rear Admiral Ather Saleem in his welcome note highlighted that Karachi Shipyard is fully cognisant and aligned with goals set forth by government and Pakistan Navy for pursuing self-reliance in naval shipbuilding sector. “Pakistan Navy’s Milgem-class corvette is a testimony of our commitment to this national cause,” said Rear Admiral Ather. –shp/pn/aaa (Image: Pakistan Navy)