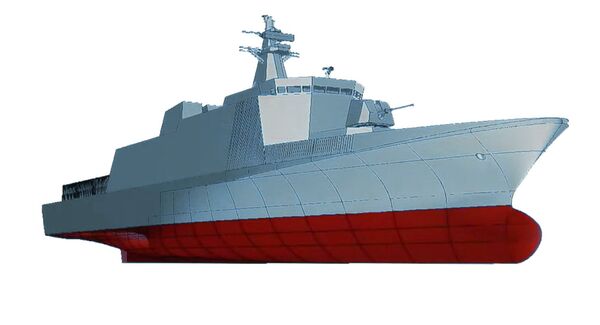 The contract is worth approximately JPY9 billion ($66.5 million) per vessel, with delivery expected beginning April 2023.

A statement from the Japanese Ministry of Defence said that the ships will measure around 95m in length, 12m in width, with a standard displacement of 1,920 tons and capable of achieving a maximum speed of 20 knots (23mph).

They will be powered by a combination of diesel-electric and diesel (CODLAD) propulsion configuration where a single propeller is powered via an electrical motor along with a diesel engine.

Reports stated that the OPVs would be constructed according to a modular system which would accommodate customization and possess enhanced capabilities compared to the current OPVs in service with the JMSDF through the combination of automation, adaptability, modularity and sustainability, employing a low radar cross-section design which would be easier maintain and less fuel consumption.

Furthermore, the OPVs are designed to be operated by lesser manpower, and boasts autonomous navigation systems, including high-tech intelligence, surveillance, and reconnaissance (ISR) equipment. In addition, each ships will have a multi-purpose hangar and deck space to accommodate modular payloads, ISO containerisation for mission modules and even manned or unmanned aircraft are also. The armaments across the vessels should range from both small and medium calibre weapons.

The procurement of these OPVs is subsequent to the Japanese National Defence Programme Guidelines which received the greenlight from the government in December of 2018 that requires the JMSDF to have 12 patrol vessels while the five-year Mid-Term Defence Programme for the fiscal years of 2019-2023 includes plans for the procurement of four more patrol vessels for the JMSDF to maintain patrol ship units to enhance intelligence, surveillance and reconnaissance capability in Japanese waters, according to the guidelines.—shp/dl/aaa (Image ATLA)