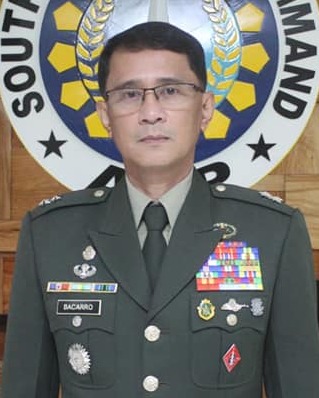 MANILA: Lt. Gen Bartolome Vicente Bacarro has been appointed as the new Chief of Staff of the Armed Forces of the Philippines (AFP) by the Marcos Jr administration. He tool over the helm from Gen Andres Centino.

Lt Gen Bacarro was the commander of the Southern Luzon Command. The change of command ceremony will be held August 8.

Shortly after graduation, Bacarro was assigned to the 5th Infantry Division in Isabela province at the height of the counter-insurgency campaign in the Cagayan Valley from June 1988 until 1995.

He was conferred the Medal of Valor award on Dec 21, 1991 for his “conspicuous acts of courage, gallantry and intrepidity at the risk of his life above and beyond the call of duty” during a 10-hour encounter with 150 fully-armed New People’s Army (NPA) rebels who attacked the town of Maconacon, Isabela on Feb 26, 1991.

In November 2004, he was designated Army spokesperson and chief of public affairs office in Fort Bonifacio. Later on, he became spokesperson of the AFP and chief of the Public Affairs Office in Camp Aguinaldo.

In 2014, Bacarro was designated as the chief of staff of the Army’s 4th Infantry (Diamond) Division. He was also chief of staff for operations (OG3); commander of the 502nd Brigade, 5thID, PA and Commandant of the PMA prior to his assumption as AFP internal auditor.

Gen Bacarro will be the first AFP chief to be given a fixed three-year term of service since the enforcement of the Republic Act 11709 by then President Rodrigo Duterte on April 13.  –shp/adj/aaa (Image: Philippine Army)